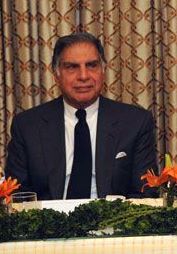 Ratan Tata, at a meeting with Hilary Clinton during her visit to India, 6 July 2010

Ratan N. Tata has been the Chairman of Tata Sons Limited, the holding company of the Tata Group, one of India’s largest business conglomerates, since 1991, joining the family business in 1962. He is Chairman of the major Tata Group companies including Tata Motors, Tata Steel, Tata Consultancy and several other Tata companies. He also serves as a director of Fiat SpA, Alcoa and Bombay Dyeing and Manufacturing Company Limited amongst a number of other appointments and directorships including positions on the UK Prime Minister’s Business Council for Britain and Business Advisory Group.

He became a director of Hakluyt's international advisory board The Holdingham Group Advisory Board[1] on 1 Jan 2013.

Directorships as of Feb 2012