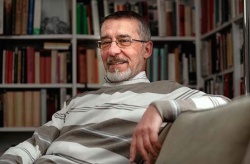 Rainer Grell formerly held a high office in the Ministry of Interior in the German state of Baden-Württemberg. He is now a prominent member of the German anti-Islam organisation Bürgerbewegung Pax Europa.[1]

He is known for developing what the British organisation Hope Not Hate has called the 'notorious “Muslimtest”, an interview guideline for foreigners longing for the German citizenship.'[1] The test, adopted in Baden-Württemberg in 2005, featured questions like 'Do you think women must obey their husbands, and if they don't, should husbands be allowed to beat them? Do you think homosexuals should be allowed to hold high-ranking government positions? Do you think the September 11th attacks were committed by terrorists or freedom fighters?'. A variation was also implemented in the state of Hesse. Grell reportedly claim it was 'developed in response to a 2004 survey by a German research institute that said almost a quarter of Muslim immigrants believe Islamic law trumps the German constitution.'[2]

The questions originally applied only to applicants from one of the 57 member states of the Organization of the Islamic Conference (OIC) or other applicants ‘appearing to be Muslims’.[3]