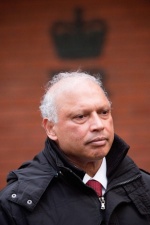 Dr Patrick Sookhdeo is founder of the Institute for the Study of Islam and Christianity and international director of the Barnabas Fund. In February 2015 he resigned from the latter's international charitable arm as a trustee and director following his conviction for sexual assault.

In 1989 Sookhdeo convened an international conference on "the plight of the Church in Muslim-majority countries".

During this conference, the appalling suffering of Christians in many such contexts was outlined, and as a result two new organisations were created. The first was a research and training institute called the International Institute for the Study of Islam and Christianity (IISIC); its aim was to study contemporary Islamic movements and their impact on Christian minorities. The second was a charity called Barnabas Fund, which sought to alleviate the plight of Christians suffering discrimination and persecution under Islam, by providing aid and relief, raising awareness of their situation, engaging in advocacy on their behalf, and encouraging prayer.[1][2]

In the early 1990s, it was the Institute IISIC that took priority, and its ground-breaking research soon revealed the Islamist terrorist organisations that were brutally attacking Christians in various Muslim contexts. A database recording details of thousands of radical Islamic organisations and groups was created. In the early 1990s the Institute produced a paper about Osama bin Laden and his influence. As a result of this research work, Robert Lambert from Special Branch of the British police force made contact with Patrick Sookhdeo, as Director of IISIC, and requested his assistance in locating and analysing these Islamist organisations and their ideological positions.[1]

After 9/11, Special Branch approached Dr Sookhdeo again to look at how the Islamist movements had developed since the early 1990s, their current expressions in the UK, and their objectives. This work with Robert Lambert later developed into the Muslim Contact Unit of Special Branch. It was during this period, as unpaid adviser to Special Branch, that Dr Sookhdeo wrote his book Understanding Islamic Terrorism, which was one of the first of its kind. [1]

Sookhdeo was born in what was then British Guyana in 1947. His father was a Hindu who converted to Islam in order to marry his mother. The family migrated to Britain in the early 1960s. By 1969, Sookhdeo had converted to Christianity and begun training for the Anglican priesthood.[3]

He holds a Ph.D. from the University of London's School of Oriental and African Studies on the impact of Islam on society. He also holds doctorates from Western Seminary, Portland, Oregon and Nashotah House Episcopal Seminary, Wisconsin.

a Senior Visiting Fellow at the Defence Academy of the UK, Adjunct Professor of the George C. Marshall European Centre for Security Studies, and Visiting Fellow at Cranfield University, UK. He is an adviser to the British armed forces on Iraq and Afghanistan. He is also the director of the Institute for the Study of Islam and Christianity and of the Barnabas Fund.[4]

In June 1999, Sookhdeo visited Israel as part of a delegation sponsored by the Anglo Israel Association.[5]

In February 2015 Sookhdeo was convicted of one charge of sexual assault and two counts of intimidating a witness or juror.[6]

In July 2018, a jury found Sookhdeo not guilty not guilty of a separate indecent assault alleged to have taken place in 1977.[7]

http://patricksookhdeo.com/; update Dec 2019: according to archive.org, the website was last online in March 2017.