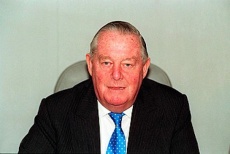 He is also known to have donated to Vote Leave, the main eurosceptic group in the UK's EU referendum of June 2016.