Patrick Moore is a former environmentalist who now works as a spin doctor for corporations engaged in environmental destruction. Much of his work is conducted through the PR firm he founded, Greenspirit Strategies. Moore has worked for the farmed salmon industry, the logging industry, the nuclear and biotechnology industries among others.

While Moore has portrayed himself in the media as a founder of Greenpeace, and this claim is often repeated uncritically by media outlets, Greenpeace says he was not a founder.[1]

Patrick Moore in 1981 on a Greenpeace action

Moore has given different accounts of the reasons for his departure from Greenpeace. He has said, for instance, that he quit because 'in the mid-Eighties the ultraleftists and extremists took over'.[2] But he has contradicted this by claiming that there were no indications of such problems with the organisation when he left, 'I had no idea that after I left in 1986 they Greenpeace would evolve into a band of scientific illiterates who use Gestapo tactics to silence people'.[3] In fact, according to Greenpeace's Tamara Stark, Moore's exit from the organisation was 'not necessarily by his own choice'.[4]

After leaving Greenpeace, Moore set up a fish farm, which failed, and in 1991 set up his own environmental PR consultancy, Greenspirit Strategies. This attracted of its own controversy.[5] Around the same time, he became a full-time paid director and consultant for the British Columbia Forest Alliance. The Alliance, although presented as a 'citizens group', was the brainchild of PR firm Burson-Marsteller.[6] The Alliance was set up with $1 million from a consortium of logging companies.[7] 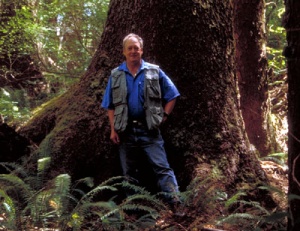 Patrick Moore as he likes to see himself - at one with nature, in an image from the Greenspirit site

Moore's activities on behalf of the Alliance have been extremely controversial. He claimed, for instance, that the World Wildlife Fund in some cases supported clear-cutting, provoking a furious response from Jean-Paul Jeanrenaud, head of the forest programme of World Wide Fund for Nature International, who accused Moore of 'grossly misrepresenting' WWF's position, something WWF 'deplored'.[8]

Moore listed his past clients on his webpage in 2002[9] as including:

At a public hearing held at Boston City Hall on October 23 2002, a proposal was discussed to ban the purchase, by the City, of Poly-Vinyl Chloride products. 'An impressive array of expert witnesses testified in favor of the resolution - an Environmental Protection Agency toxicologist, a Tufts University economist, a Boston Public Health Commission official, the head of purchasing for a cancer research center. The production and incineration of PVC products, they argued, releases chemicals known as dioxins, exposure to which can lead to endocrine disorders, cancer, diabetes, infant mortality, and cognitive and developmental problems in children.'[10] Wired in a portrait of Moore entitled "Eco-Traitor" reported on the hearing:

'Then Patrick Moore took the floor. "It's a good thing most of the people who got up here before me weren't under oath," he began. "There is not a public benefit to be derived from a ban on PVC." The whole issue is "based on bad science and misinformation."

First of all, Moore argued, total dioxin emissions have dropped 90 percent since 1970, to levels safely below those that cause health problems. Furthermore, dioxins are not some newfangled product of the industrial age. They've been around as long as fire. If the council wanted to make a real difference, he said, it could ban backyard burning, which spews nearly 60 times more dioxins than PVC manufacturing, or residential fireplaces, which emit 10 times more.

Throughout his presentation, Moore made barbed references to the devious forces behind the legislation, the same pack of Luddites who "hijacked a considerable portion of the environmental movement back in the mid-'80s and who have become very clever at using green language to cloak campaigns that have more to do with anti-industrialism, antiglobalization, anticorporate, all of those things which are basically political campaigns."

It was a bravura performance. When Moore returned to his seat, he was greeted with handshakes and backslaps from the folks who had paid his way: the Vinyl Institute.'[11] 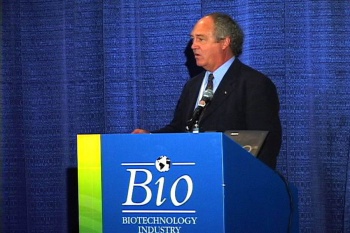 Although the headline proclaimed Moore to be Greenpeace's 'founder', its opening sentence changed his background to 'ecologist and co-founder of Greenpeace'. A paragraph later Moore's status was reduced yet further to ' a founding member of Greenpeace'.

The press release went on to say that despite many years of involvement with the organisation, 'Recently... he broke with Greenpeace, accusing it of abandoning science and following agendas that have little to do with saving the Earth.'

The biotech industry flew Patrick Moore to appear as one of its expert witnesses in front of the Royal Commission on Genetic Modification in New Zealand. His only 'expertise', however, appeared to be his connection with Greenpeace.[13]

Press articles have also portrayed Moore and his support for GM in terms of the recent disillusion with Greenpeace of its founder. But far from leaving Greenpeace recently, Moore quit almost two decades ago and he was never more than a founding member.

When asked why he opposed the campaign of concern over GM crops, Moore told New Scientist, 'I believe we are entering an era now where pagan beliefs and junk science are influencing public policy. GM foods and forestry are both good examples where policy is being influenced by arguments that have no basis in fact or logic.'[14]

To some, Moore's pro-GM stance seems less part of a road-to-Damascus conversion away from ultra-leftism, pagan beliefs and junk science, and more part of a career trajectory over the last two decades that has been industry-symathetic, and often industry-funded.

Moore was a speaker at the March 2006 FORATOM hosted second biannual pro-nuclear conference. It was promoted under the banner "Nuclear energy: Riding the Winds of Change". The conference chairman was Mike Parker from BNFL. Other speakers along with Moore included Giles Chichester MEP; Pierre Gadonneix, the chairman of EDF and Andris Piebalds EU Commissioner for Energy.[15]

In an article in the Washington Post in 2006, Moore explained his pro-nuclear views, and how happy he was to find out he's not alone:

'There are signs of a new willingness to listen, though, even among the staunchest anti-nuclear campaigners. When I attended the Kyoto climate meeting in Montreal last December, I spoke to a packed house on the question of a sustainable energy future. I argued that the only way to reduce fossil fuel emissions from electrical production is through an aggressive program of renewable energy sources (hydroelectric, geothermal heat pumps, wind, etc.) plus nuclear. The Greenpeace spokesperson was first at the mike for the question period, and I expected a tongue-lashing. Instead, he began by saying he agreed with much of what I said -- not the nuclear bit, of course, but there was a clear feeling that all options must be explored.

Here's why: Wind and solar power have their place, but because they are intermittent and unpredictable they simply can't replace big baseload plants such as coal, nuclear and hydroelectric. Natural gas, a fossil fuel, is too expensive already, and its price is too volatile to risk building big baseload plants. Given that hydroelectric resources are built pretty much to capacity, nuclear is, by elimination, the only viable substitute for coal. It's that simple.'[16]

Moore has been employed to promote nuclear energy by the Clean and Safe Energy Coalition, which is a front group for the Nuclear Energy Institute set up with the help of PR giant Hill and Knowlton and millions of dollars from the nuclear industry.[17]

Topics covered in this article: