Patrick Michaels is a Cato Institute scholar who asserts that global warming is a ‘myth’.[1] Michaels bases his opinion on evidence from the work of Noah Keenlyside and his team from the Leipzig Institute of Marine Science. According to their paper, the Earth’s oceans have a natural variability which will ‘temporarily offset’ global warming from carbon dioxide.[1] The argument is that the Earth’s surface is 70% oceanic, therefore significantly influences global temperature, this means that ‘Both Atlantic and Pacific temperatures can get “stuck” for a decade or longer, in relatively warm or cool patterns.’[1] Michaels also criticises legislative efforts to control climate change, stating, ‘Science no longer provides justification for any rush to pass drastic global warming legislation’.[1]

Michaels described the Climate Security Act, which aimed to cut emissions of carbon dioxide by 66% over the next 42 years, sponsored by Joe Lieberman and John Warner as ‘impossible to achieve’, and he called the Interior Department’s intent on naming the polar bear an endangered species as a ‘political stunt’ because they were, according to Michaels, near record-high population levels.[1]

Michaels has numerous links to anti-environmental and right-wing groups. He is an adviser to the American Council on Science and Health, The Advancement of Sound Science Coalition (now defunct), the American Policy Center and Consumer Alert[2]. He has debunked climate change at a press conference for Consumer Alert along with other known climate sceptics.

Along with Robert Balling, Michaels has represented the fossil-fuel corporate front groups the Global Climate Coalition and the Information Council on the Environment (ICE), the latter funded by the National Coal Association. Leaked memos details how the Association planned test marketing of the idea to “reposition global warming as theory (not fact)”. [3].

A leaked memo from the Intermountain Rural Electric Association shows that they paid Michaels $100,000 in February 2006.

Michaels testified in 1995 that he had received $16,000 in funding in the previous five years from the German Coal Association and Western Fuels Company[4]

Michaels was accused of altering the evidence James Hansen gave for his Congressional testimony on global warming in June 1988. [5]. 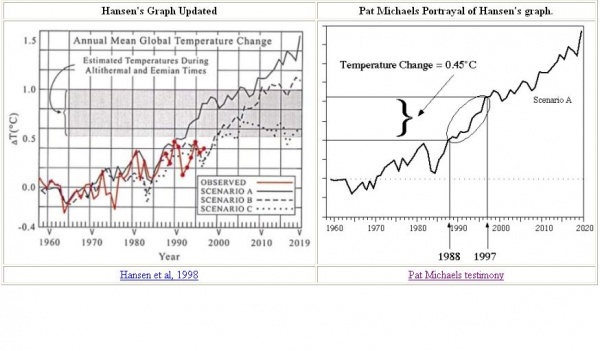 Hansen said he was highly confident in the arrival of a long-term warming trend, due to the greenhouse effect. He provided a graph which outlined three scenarios, based on different levels of CO2 output. These scenarios were shown to demonstrate the wide range of possibilities of how CO2 forcings would develop, as it is too difficult to gauge how much coal humans will potentially burn.[5] 10 years later, Hansen updated the graph with the most recent measurements made of temperature, and it was found that his predictions from the original graph were very accurate. (Graph also provided here).[5] Patrick Michaels also testified in front of Congress, using Hansen’s graph, however he had erased the scenarios B and C, which were considered the two most accurate scenarios.[5]

Michaels and Cato have spoken out against Kyoto in numerous press articles. For example: “The Kyoto Protocol is wildly popular in Britain largely because the country seems to lack scientists courageous enough to point out that the government's alarmist view of climate change is without merit”.[6]. He also opposes domestic US initiatives to tackle climate such as McCain-Lieberman bill, which he calls an “intrusion into business, the economy, and, eventually, into your home”, which “is totally unnecessary”. [7]

Michaels' newsletter, the World Climate Report, is funded by the Western Fuels Association, and can be found on the website, www.co2andclimate.org/editors.html, which is run by the Greening Earth Society / Western Fuels. The Contributing Editor is Robert Balling. Sallie Baliunas has also been a past contributing editor. Other contributors include Dr. Thomas Gale Moore from the Hoover Institution. [8] In his book “The Heated Debate”, [9] In 1996, Michaels was listed as a member of ESEF.