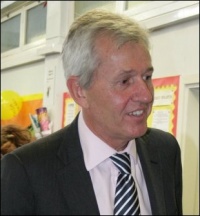 Nick de Bois was the British Conservative Party MP for Enfield North from 2010 to 2015.[1]

de Bois was part of a 10-person parliamentary delegation to the United Arab Emirates (UAE) in April 2012.

The trip lasted five days and gave British parliamentarians the opportunity to meet with senior government officials and private companies in both Dubai and Abu Dhabi. The UAE government paid £3,500 toward his travel and accommodation.[3]