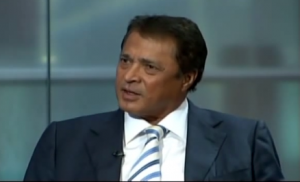 Moni Varma is the managing director and founder of Veetee Rice Company, one of the largest producers of rice in the UK.

When Varma originally arrived in England in the early 1980s he intended to use in background in steel production in Malawi to start a plant producing reinforcement mesh. However, his relatives in northern India had other ideas and wanted to sell rice in Britain and wanted Varma to help with contacts.

Letter to the Telegraph

On 1 April 2015 Varma was one of 103 business leaders who wrote to the Telegraph praising the British Conservative Party's economic policies and claiming a Labour government would 'threaten jobs and deter investment' in the UK.[2]

Varma is a former Labour supporter who is now a Conservative backer.[3]

In October 2015, Varma signed a letter in The Guardian along with more than 150 people drawn from the arts and politics. The letter launched Culture for Coexistence, an organisation that opposes the Boycott, Divestment and Sanctions movement.[4]

In 2011 it was announced Varma planned to sue his former friend and Britain's richest man Lakshmi Mittal for allegedly going back on a multi-million dollar agreement to pay fees to Varma for helping to secure an oil deal in 2006 with Olusegun Obasanjo, the former Nigerian president. At the time, Mittal dismissed the claim saying the claim will be defended vigorously.[5]

In 2013 the case was resolved at the 'eleventh hour' with an out-of-court settlement.[6]