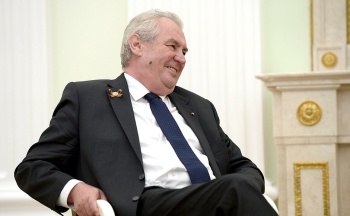 Zeman on May 9, 2015, at a meeting with Putin at the Kremlin. Credit: Kremlin staff

Miloš Zeman is the third and current President of the Czech Republic, since 8 March 2013. [1]

Although officially on the left-of-center, Zeman has clearly espoused an anti-immigrant and anti-Islam stance, and has been especially vocal since the start of the refugee crisis. In September 2016, The Guardian said of him that:

'The Czech president has unleashed a rhetorical fusillade against Muslim incomers of such intensity that it makes the anti-Islamic sentiments of Robert Fico, the Slovakian prime minister, and even Viktor Orbán, Hungary’s prime minister – who is holding a referendum next month aimed at establishing public opposition to accepting migrants – seem mild in comparison.' [2]

In 1968, during the Prague Spring, he became a member of the Communist Party of Czechoslovakia but was expelled in 1970, because he disagreed with the party line on the Warsaw Pact invasion of Czechoslovakia. [3] In 1990 he then became a member of the Czech Social Democratic Party (ČSSD). In 1992, he successfully ran for the Chamber of the People of the Federal Assembly and was elected chairman of the party in 1993.[4]

The ČSSD won the election in 1998 and Zeman became the Prime Minister of his own minority government, until April 2001. [3] Zeman then retired and moved to live in the countryside (Vysočina Region). When his nomination for Czech president failed at the 2003 presidential election, due to party disunity, Zeman became an outspoken critic of his former party's leaders and eventually left the Czech Social Democratic Party on 21 March 2007, due to conflicts with the leader and chairman, Jiří Paroubek. [5] In October 2009, he founded a new party, Party of Civic Rights – Zemanovci. [6]

In January 2013, Zeman was elected as President of the Czech Republic with 54.8% of the popular vote. He is the first directly elected President in Czech history; both of his predecessors, Václav Havel and Václav Klaus, were elected by the Parliament. [1]

On Islam, Muslims and immigration

Zeman sets out what he sees as the threat being posed by radical Islamists – and even 'moderate' Muslims, who he says could be radicalised to commit terror attacks as ordinary Germans were once inspired to fanatically back Hitler:

'In the 30s, the overwhelming majority of Germans were decent people [...]. In a few years, they became Nazis, even fanatic Nazis. And the radicalisation of the – till these times – moderate Muslim population might be like the case of the German population. It might be easier than the German population, [because] you have a very radical ideology based on a religion.' [2]

He has further claimed Muslim integration in Western Europe is 'practically impossible' during a televised interview with the tabloid newspaper Blesk, as shown by 'the experience of western European countries which have ghettos and excluded localities'. He warned that Islamic 'culture' should not be taken into Europe, or else 'it will end up like Cologne', referring to the large number of sexual assaults on New Year's Eve in the German city. [7] [8]

In an interview on October 3rd the the Financial Times, he said:

'I am not against migrants in my country from Ukraine, Vietnam, Russia, Belarussia, Serbia, and so on, I am only against Islamic migration, because I think there is full incompatibility of culture — as one example only, the attitude of Islamic migrants to women. Completely different from European culture.' [9]

On Islam and women

In 2016, The Guardian reported he had called Islam 'a religion of death', and stated:

'You might say that Islamic migration is composed of peaceful people. Let me give you one example. The attitude of Islam – I do not speak about jihadists, I speak about Islam – towards women, half of the population. As you know, in the Qur’an, women is something like the inferior part of mankind.' [2]

In previous interviews, he had spoken of immigration from Muslim communities in similar ways, using women's rights as a way to tackle the religion. He had warned that Muslim immigrants would 'respect Sharia instead of Czech laws', under which 'unfaithful women [would] be stoned and thieves [would] have their hands cut off, and we'[d] be deprived of women's beauty, because they'[d] be veiled from head to toe'. [10] He added that women covering their face 'would mean an improvement' for some, 'but there are few of them and I cannot see any such here.' [11]

Reactions to the Refugee Crisis 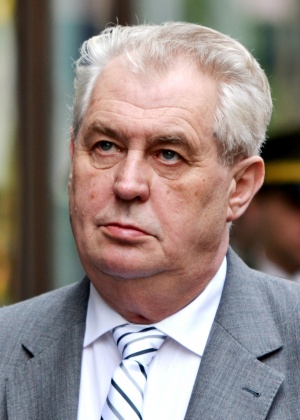 'The Muslim Brotherhood cannot start a war against Europe, it doesn’t have the power, but it can prepare a growing migrant wave and gradually control Europe.' [7]

He had already spoken, in June 2015, of what he saw as 'security' issues with letting in refugees. Zeman believes some of them might be extremists, coming into Europe to 'radicalise' more 'moderate' Muslims, a problem onto which is added the allegedly 'incompatibility' of their 'culture' with the Western world [12]:

'If European countries accept a wave of migrants, there will be terrorist groups among them, of which also a Libyan minister has warned. By accepting the migrants, we strongly facilitate Islamic State’s expansion to Europe.' [13]

He justified the use of Greek islands in the following way:

'We are in Greece, and Greece has plenty of uninhabited islands, and big foreign debt. So if you have ‘hotspots’ in Greek islands, this would be a sort of payment of foreign debt'.

Zeman addressed the UN General Assembly on the subject of terrorism in September 2016, calling for a military strike against the 'nerve center' of international terrorism, without saying precisely what he believed it to be. Zeman said the time had come to put to use article 47 of the UN Charter which enabled the creation of a joint military force to combat a global threat, and added that another threat was that of the 'radicalisation' of populations under terrorist groups' control. [14]

The president does not hide his Euroscepticism, manifested in his denunciation of EU sanctions against Russia over its annexation of Crimea and in his demand for referendums on the Czech Republic’s membership of the EU and Nato (while insisting he would advocate staying in each). He described the EU as a broken-down train described in an old Soviet joke about the collapse of communism, where the leaders 'simply close the curtains and simulate that without any change of strategy, the European Union is going on.' [2]

In an interview with The Guardian, he said that the country’s need to remain in the EU, which it joined in 2004, is justified by 'money, money, money'.

'My cynical explanation is that we are not the net payer in the European Union. We get a huge amount of subsidies from European funds. This is not the situation of British people, of course.' [2]

In response to Zeman’s referendum proposal, Czech Prime Minister Bohuslav Sobotka’s office said that the government had no intention of holding a referendum. [15]

In a September video interview on the iDnes news portal, Zeman declared his support from the Republican candidate Donald Trump ('if I were an American citizen, I would vote for Donald Trump'), adding that Hillary Clinton would just continue the policies of Barrack Obama’s administration that turned the Middle East into a place full of 'festering wounds' if elected. [16]

Responses to accusations of 'populism' and Islamophobia

'Winston Churchill has been always a populist and he was right. And all who criticised him were wrong. What does it mean, a populist? It is a slogan, a label, nothing more.' [2]

'The term Islamophobia has never been properly defined. I speak against Islamic radicalism. [...]So, for the authors of this information, I have just one wish: that somebody will not cut their heads off [while they are] alive'.