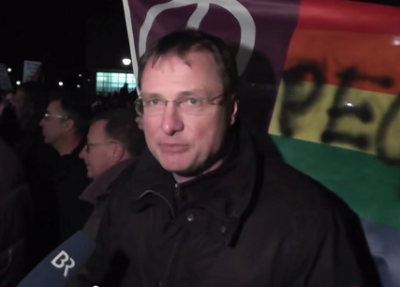 Stürzenberger being interviewed at a PEGIDA rally, Dec 2014.

Michael Stürzenberger is an anti-Islam activist and member of the Die Freiheit party in Germany. He was elected federal chairman in either December 2013 or January 2014.[1]

Marian Hoffman of the Christian Social Union (CSU) has reportedly compared his public demonstrations to the 'droning speeches of the Nazis'.[1]

A decade ago, Stürzenberger, 49, was the spokesperson for the Munich office of the Christian Social Union (CSU), the Bavarian sister party of Chancellor Angela Merkel's Christian Democratic Union (CDU). But since 2012 he has been active in a splinter party called Die Freiheit ("Freedom").[1]

According to Der Spiegel, Stürzenberger preaches hate against Islam, compares the Koran to Hitler's Mein Kampf, believes the Koran is 'the most dangerous book in the world', and that Sharia law 'instructs men to hit women'.[1]

Stürzenberger attended the attempted relaunch of the European Defence League in Århus, Denmark, on 30 March 2012 brandishing the Israeli national flag.[2]

He has reportedly spent two years collecting signatures in opposition to the planned construction of an Islamic center in Munich and has 'held over one hundred anti-Islam rallies'.[1]

In January 2015, he was interviewed by BBC World about the 'anti-Islamisation' movement PEGIDA in Germany. He voiced support for its politics, citing 'uncontrolled immigration', 'growing sharia', 'growing criminality' and 'privileges given to Muslims'.[3]