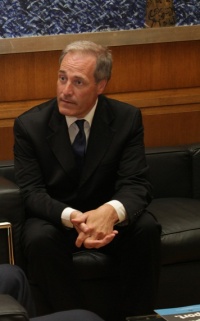 Michael Bates, Lord Bates, was made a Conservative peer in 2008. He was previously MP for Langbaurgh 1992-97, during which time he helds posts as a government whip and as paymaster general. He served as Deputy Chair of the Conservative Party 2007-10, and as Shadow Minister (Business, Innovation and Skills) 2009-10.[1] he was appointed a Lords Whip in October 2013.[2]

In August 2014 he was appointed parliamentary under-secretary of state at the Home Office. [3]

In May 2015, Lord Bates was appointed minister for state at the Home Office, overseeing the areas of Home Office legislation and House of Lords Business, animal testing and devolution.[4]

Less than a year later, in March 2016, Bates resigned from the government.

Recorded by the Electoral Commission:[5]