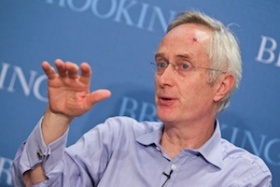 Michael Barber: perhaps 'the single most influential educator on the face of the earth'

Michael Barber has become a leading player in market-based education reform around the world.

Fortune described him as perhaps 'the single most influential educator on the face of the earth'.[1]

Barber is Chief Education Advisor to education company, Pearson; and Managing Partner of Delivery Associates, a consultancy firm that claims to be 'global Leaders in public sector strategy and implementation'[2]

Barber's schtick is the ‘emerging science of delivery’, or what he terms 'deliverology'. Deliverology is a management process for government. It has been described as 'methodologically very simple': 'set targets, make a plan to deliver against targets, keep asking if the targets have been delivered, report against targets.' It has been criticised as a 'command and control' way of governing, with a small, 'high-quality' delivery unit at the centre, that relies heavily on real-time - often intrusive – data gathering on very specific targets, such as particular educational standards.

According to Dominic Cummings, former adviser to Michael Gove:

'In 2001, Tony Blair took Sir Michael Barber from his perch as special adviser in the Department for Education and brought him into Downing Street. Once there Barber set up Blair’s ‘Delivery Unit’ and oversaw his attempts to reform public services. He then moved to the McKinsey consultancy where he cloned his unit for governments around the world."

Steve Hilton, David Cameron’s adviser, is reported saying to Barber six months after the 2010 election: ‘I know we disparaged targets and delivery and all that when we were in opposition, but now we’ve been here a while, we have a question: how did you do it?’ Barber replied: ‘You’ve learned fast. It took Blair four years to learn the same thing.’[3]

Barber is co-chair of Boston Consulting Group's foundation for improving the delivery of policies by governments, Centre for Public Impact[4]

Barber joined education giant, Pearson as Chief Education Advisor in September 2011. He leads Pearson’s worldwide programme of 'efficacy' and research, advising on and supporting the development of products and services that build on the research findings. He also plays a particular role in Pearson’s strategy for education in the developing world, and was Chairman of the Pearson Affordable Learning Fund (see Pearson for more on the Fund).[5]

Prior to Pearson, Barber was a Partner at McKinsey & Company and Head of McKinsey’s global education practice. During this period, he co-authored two controversial, but influential McKinsey education reports:

Barber previously served the UK government as Head of Tony Blair’s Delivery Unit (from 2001-2005) and as Chief Adviser to the Secretary of State for Education on School Standards (from 1997-2001).

Before joining government he was a Professor at the Institute of Education at the University of London.