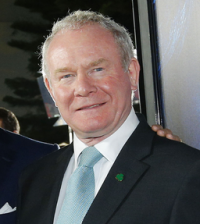 Martin McGuinness has been the Deputy First Minister of Northern Ireland since 2007. He is a Sinn Fein Member of the Northern Ireland Assembly for Mid Ulster, and is a former MP for Mid-Ulster.[1]

McGuinness confirmed to the Saville Inquiry that he was second-in-command of the Provisional IRA in Derry at the time of Bloody Sunday massacre on 30 January 1972.[2]