Martin James Hewitt is a senior police officer with the Metropolitan Police, tasked with formulating the force's response to the public inquiry into undercover policing. 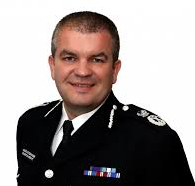 As Assistant Commissioner for Professionalism, Hewitt heads the Metropolitan Police's 'Total Professionalism Programme', part of the corporate change portfolio. The goals are quite ambitious:[1]

The Total Professionalism Programme was initiated in 2012 to raise standards of leadership and behaviour; enhance MPS reputation; increase trust and confidence and change MPS culture to ensure the MPS is the best police service in the world.

As such he also oversees the Directorate of Professional Standards (DPS), and its Special Investigations Unit. These had previously been part of the remit of the Deputy Commissioner.[2] The DPS liaises regularly with the Independent Police Complaints Commission.[3]

Hewitt also oversees a number of issues in relation to major scandals which the Metropolitan Police have been embroiled in, including:

Hewitt appeared alongside the head of Operation Herne Mick Creedon in a July 2014 press conference where it was revealed that the Special Demonstration Squad had spied on the families campaigning for justice following the deaths of loved ones. This included the Ricky Reel family. At this conference the line put out by the Metropolitan Police was that there had been no specific tasking of the undercover officers against the families concerned, and it amounted to 'collateral intrusion'.[13]

I can absolutely apologise for the distress that this has caused the families. We need to understand all the facts of everything that has gone on.

I really do hope that today’s report which is categoric in stating that undercover officers were not tasked to go and gather intelligence directly from the families or directly from those groups that were legitimately supporting their cause, will go some way to reassure people.

In the July 2014 publication "Integrity in Policing" Hewitt formulated the Met's view on undercover policing after three years of revelations starting with the exposure of Mark Kennedy:[16]

The Role of Undercover Policing

The Met recognises that this is one of the most intrusive tactics the police can use, however, undercover policing still remains a critical tool in tackling terrorism and serious and organised crime. In the last 12 months alone, operations supported directly by undercover officers have led to almost 1,400 charges for serious crimes.

To protect individuals including the public, and to ensure successful investigations, undercover policing must operate in a secure and confidential fashion. Undercover officers, all of whom are volunteers, are given a lifetime guarantee that we will protect their real identities. The Met does not want to break that undertaking and expose them and their families to risks of serious harm. This risk should not be underestimated. The Met will hand over all the records we can find to the public inquiry, but we will ask that some of them remain confidential in order to protect both the safety of the officers and others that may be exposed by the deployment, and to protect the tactics used.

It must also be made clear that undercover policing has already changed significantly since the 1990s. Units like the SDS, which was closed down in 2008, are no longer in existence and undercover operations today are unrecognisable from how that unit operated. There are now much stronger legal and ethical safeguards. Legislation requires an officer authorising an undercover deployment to take into account, and minimise, the risk of interference with the private and family life of people who are not the intended subjects.

The Surveillance Commissioner, independent from policing and the Met, now has oversight of all undercover deployments and they also now authorise all deployments over one year duration.

The roles performed by undercover operatives are revealed to the Crown Prosecution Service in all prosecutions.

Let me be clear, it is critical that policing retains this tactic, but we must do everything we can to ensure we remain lawful, ethical and proportionate. We are committed to learning and strengthening the safeguards around operation of undercover policing.

Following the shooting of Mark Duggan by Metropolitan Police officers, Hewitt was the Gold Commander at Scotland Yard dealing with the immediate aftermath, assuming overall control within minutes of the shooting reporting to AC Lynne Owens.[17] In particular he was line manager for the MPS Specialist Firearms Command (SCO19 / CO19) at the time, and as such he appeared in the inquest into Duggan's death.[18]

Hewitt played a role in the phone hacking scandal as a senior investigator with the 2010 Operation Varec under the AC John Yates, which was the original and now discredited investigation into allegations of phone hacking by the News of the World and other newspapers.[19] On the basis of this investigation, John Yates would - wrongly - recommend to Commissioner Paul Stephenson that there was no further evidence requiring re-opening of previous investigations into phone hacking.[20]

He went on to lead the 2014 Operation Silverhawk, which investigated the activity of the controversial Sun journalist Mazher Mahmood's role in the collapsed trial of Tulis Constavlos.[23] This investigation came under criticism for not looking at the other convictions based on evidence from Mahmood.[24]