It is 'focused on the development of a CO2-enhanced oil recovery ("CO2-EOR") program at Poplar Dome in eastern Montana and the exploration of unconventional hydrocarbon resources in the Weald Basin' in the United Kingdom.

Magellan's UK position consists of interests in seven exploration permits located in or adjacent to the Weald Basin, which is located southwest of London and which contains multiple unconventional and conventional oil and gas prospects.

In the UK Magellan co-owns three of its licences equally with now dissolved Celtique Energie, which previously acted as the operator. PEDLs 231, 234, and 243 cover the depocenter of The Weald Basin, which is located southwest of London: [1]

On the periphery of the Weald Basin, in 2014 Magellan maintained non-operated interests in four additional exploration licenses,

representing an additional 16 thousand net acres, that may be prospective for conventional oil and gas targets.

Magellan announced plans to drill two exploration wells within its licence areas in 2014. The first of these was to be carried out by partner Angus Energy, which announced plans to spud in July 2014 an exploration well on the Horse Hill prospect located within the Petroleum Exploration and Development License ("PEDL") 137 area. Angus said it would carry 100 per cent of Magellan's costs for this well, after which the company will retain a 35 per cent working interest in the well and the PEDL.

Later in 2014, Magellan planned to fund its 50 per cent share of a well to be drilled by its then partner Celtique Energie ("Celtique") at Broadford Bridge, located within the license area of PEDL 234. In a press release it said that:

Both wells will be drilled vertically and completed without the use of hydraulic fracturing and ultimately target conventional Triassic gas plays. However, during drilling, Magellan will have the opportunity to core and log various shale and tight formations in the Cretaceous and Jurassic sections of the Weald Basin.[2]

Party to injunction against protestors in 2018 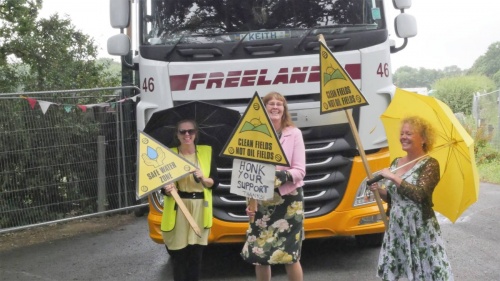 In early 2018 UKOG and its partners Magellan Petroleum and Horse Hill Developments applied to the courts for a 'draconian' and wide-ranging injunction that sought to outlaw protests at three exploration sites in West Sussex and Surrey. This followed the occupation of the Horse Hill site by protestors in late November 2017.

Six environmental campaigners unsuccessfully sought to overturn this injunction attempt in the High Court in July 2018, accusing UKOG of attempting to stifle protest in a “draconian and chillingly anti-democratic” fashion. The injunction – addressed to “persons unknown” – would cover all campaigners protesting at the UKOG sites. Those breaching the injunction could be jailed, fined or have their assets seized. The campaigners included actress Sue Jameson, and together crowdfunded £20,000 in public donations for legal costs. [3]

The High Court injunction against protest at the Horse HIll and Broadford Bridge exploration sites was awarded to UKOG and its partners in September 2018. [4]