Mackenzie Institute for the Study of Terrorism, Revolution and Propaganda

The crest of the Mackenzie Institute since at least 2002. Luceo non uro means 'I shine, not burn' and is the moto of the Clan Mackenzie[1]

The Mackenzie Institute for the Study of Terrorism, Revolution and Propaganda is a think tank in Toronto, Ontario, Canada. Founded in 1986 by Brigadier Dr. Maurice Tugwell, a former Parachute Regiment officer, British Army veteran of WW-2, Palestine (1947), the Malayian insurgency, Cyprus and Northern Ireland, where in 1971 he headed the British Army's covert black propaganda unit, Information Policy. In 1990 the current head of the Institute John Thompson - a former member of the Canadian Forces and the Canadian Institute of Strategic Studies - joined the Institute.[2]

The institute is a non-profit organisation ; it does not accept government funding. The institute publishes online research papers on a wide variety of political matters, with a focus on terrorism, war, and organised crime.[3] Its mission is to "provide research and commentary on its subject matter, to promote informed public debate, and to hold to the proposition that our liberal democratic tradition must be safeguarded and fostered" It is also "concerned with the social and political stability of Canada, and works to enhance it when it can". The institute is named after Canadian explorer Alexander Mackenzie. [4] Its current executive director, John C. Thompson, often appears as a television contributor on terrorism and military issues in Canada.

In July 1995, members of the Animal Liberation Front reportedly sent a pipe bomb to Thompson's office in Toronto. His assistant would have been killed, except that the device's battery had become disconnected through mishandling by Canada Post.[5][6]

Several newspaper reports have described the institute as a conservative or right-wing organization.[7] In 1994, journalist Michael Valpy criticized the institute for producing what he described as an ideologically-driven report of supposed "leftist conspiracies".[8] Thompson has repeatedly rejected such descriptions, describing himself as a "classical liberal".[9] He has written, "if being a traditional liberal these days means being condemned as a right-wing nut, I plead guilty".[10]

In 2005, the institute released a report entitled "Waiting for the Kaboom: Indicators to Watch for", described as a citizen's guide to finding terrorists. In this report, John C. Thompson encouraged Canadians to watch for theft of credentials and credit cards, attempts to buy weapons in bulk, increased visits to access tunnels under office towers, and large groups of men living together "for no apparent purpose". He also warned Canadians about people wearing bulky clothing in hot weather, arguing that suicide bombers sometimes wear several sets of underwear to protect their groins for the virgins they believe martyrs receive in the afterlife. These guidelines were welcomed by some law enforcement groups, but were also met with some criticism.[11] Canada's Public Safety ministry declined to comment on the release.[12] The Mackenzie Institute later issued a revised version of the report, under the new title "Precursors of Hostile Intent: Signs of a Potential Terrorist Attack".[13] 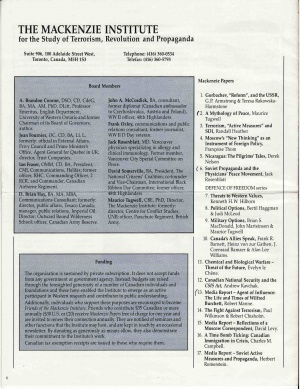 Update on the Mackenzie Institute, Spring 1990

The institute's budget is over $1 million and is provided by individuals, foundations and corporate donations. It does not accept government funding. The institute performs contract work for small and large companies.[17] 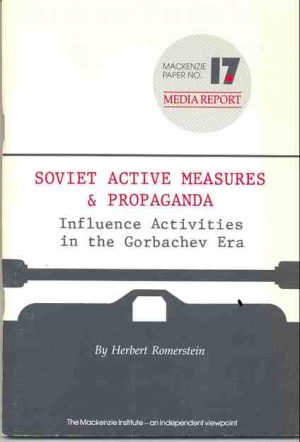 Mackenzie Paper No. 17, shows the preoccupation with Soviet propaganda