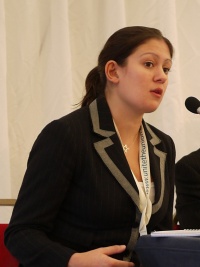 Lisa Nandy has been the Labour Party MP for Wigan since 2010. She has served as a shadow minister for education and for the Cabinet Office (2013)[1] and was shadow energy and climate change secretary from September 2015 [2] until June 2016.

Nandy is a granddaughter of Frank Byers, the Liberal MP for North Dorset from 1945-50.[3]

In September 2014 Nandy was involved in helping to oversee the Labour Party's plans to turn the Government’s limited lobbying register into something far bigger. Labour has already been clear that it will broaden out the lobbying register from the Government’s narrow focus on ‘consultant lobbyists’. They hope to add many more names and extra details on to the register so that lobbying transparency will be far more extensive. [4]

Some have seen this plan as a signal that Labour is keen to crack down on lobbyists, but Nandy suggests otherwise, saying that: 'I think it is fair to say that the vast majority of lobbyists are engaged in perfectly legitimate activity'. [4]

Nandy hopes to 'lead Labour down the road to lobbying transparency', saying 'why wouldn’t we make this information available in a 21st-century democracy?'. Nandy and the Labour party feel that it is incredibly important to try and put public confidence back into the activity of lobbying and the industry. [4]

'The controversy over this application shows fracking is still hugely contentious yet the Tories abandoned their promise of tougher safeguards. We need robust rules to offer communities reassurance that the environmental risks will be properly managed and local concerns will be listened to. There should be a moratorium until stronger protections are in place.' [5]