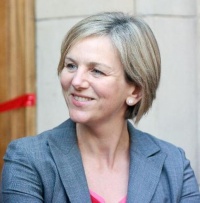 In September 2015, she once more took up the mantle of Secretary of State for Transport as she did under Ed Miliband's leadership. [5]