John Dunn Laird, Lord Laird has been an Ulster Unionist peer since 1999.[1] He is a self-described "PR Guru" with his own PR and lobbying firm, Biscuit PR Consultancy in Mayfair, London.

In June 2013 Laird was one of several peers targeted by undercover reporters who offered cash incentives for them to ask questions in the House of Lords. Laird has denied the allegations that he had agree to act as a paid advocate or received payment for services, but resigned the Ulster Unionist party whip and referred himself to parliamentary authorities. The Unionists suspended him from the Westminster team after seeing footage filmed by the Telegraph and Sunday Times stings, which it concluded "was not edifying". Laird later declared he had been the "subject of a scam" by journalists and had not broken any rules.[2]

A PR Guru and a 'dapper, charismatic gentleman' 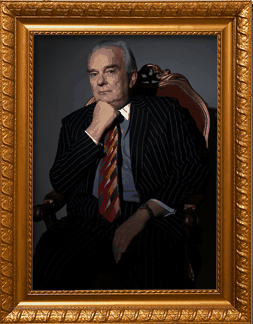 Laird's biography on his company website - headed 'Meet The Lord Laird of Artigarvan' - is accompanied by a grand portrait and makes much of his gentlemanly standing and connections:

Seventeen American Presidents, Davey Crockett and two astronauts (including Neil Armstrong) and John Lord Laird all hail from an Ulster Scots background. John Laird will have you charmed at first contact. This dapper, charismatic Gentleman Biscuit brings a broad experience in almost all areas of Public Relations. He has been professionally involved in public relations since 1972; initially through Government Information agencies in New York.

Considered a PR guru Lord Laird enjoys being able to share his knowledge. He has a vast insight into how administrations work because he has been involved with them first hand – he has lobbied in both America and European parliaments. This is one man you want shouting from your corner. Lord Laird is a man of his own time. Always observing, always thinking. Speaking to him you will get a sense that you are being listened to with both ears – note the slight tilt of his head and hands on his hips. He’ll follow up that listening with action.

His life’s ambition was to be a barrister or a stand-up comedian. ‘I wasn’t clever enough for one and the Law school was full so I couldn’t do the other.’ Public Relations became his true calling.

Laird resigned the Ulster Unionist whip on 2 June 2013 after he was "alleged to have offered to carry out parliamentary work for cash after being caught in two separate stings by undercover journalists posing as lobbyists".[3]

Ulster Unionist leader Mike Nesbitt said he had watched the undercover reporters' footage and that it was "not edifying".

Having reviewed the video footage on the Daily Telegraph website and other media reporting of Lord Laird's engagement with alleged lobbyists, I telephoned his home this morning (Sunday) and as a result he has relinquished the party whip, pending the outcome of the review of his behaviour that he has already requested of the relevant authorities at Westminster," Mr Nesbitt said. He told BBC Radio Ulster's Sunday Sequence: "Any sensible, right-minded person watching that video clip would form an opinion and that is not the opinion I would want for the Ulster Unionist Party. Nobody gets privilege from the Ulster Unionist Party, we expect high standards, we really do.