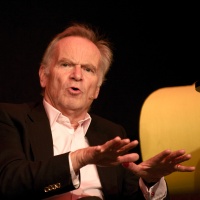 Jeffrey Archer is a British writer and politician.

He was Conservative MP for Louth from 1969 to 1974, and deputy chairman of the Conservative Party from 1985 to 1986.[1] he resigned from the latter position in 1986, after the News of the World reported he had paid an estimated £2,000 to prostitute Monica Coughlan through his friend Michael Stacpoole. The Daily Star went further alleging that Archer slept with Coghlan. Archer sued the latter paper and won a record £500,000 in a libel action in 1987.[2]

He entered the House of Lords as Baron Archer of Weston-Super-Mare in 1992.[3]

In 2001, Archer was convicted of two charges of perjury and two of perverting the course of justice after his former friend, Ted Francis, and former personal assistant, Angela Peppiatt, admitted to helping construct false alibis in the Daily Star libel case.[4]

Logo Logistics, a company run by British mercenary Simon Mann received £135,000 from a J.H. Archer on 3 March 2004, shortly before Mann's attempted coup in Equatorial Guinea. There was speculation that the individual concerned was Lord Archer, whose forenames are Jeffrey Howard.[5]

Lawyers for Equatorial Guinea claimed that phone records showed that Ely Calil had made four calls to Archer's home in the weeks leading up to the coup attempt.[6]

Archer's secretary told journalist Adam Roberts that "he knows nothing about and doesn't want to say anything about it", while his lawyers stated that Archer had never "issued a cheque in the sums mentioned." Roberts suggested that the money might have been paid by a bank transfer rather than a cheque, but also suggested that Archer may not have known what the money would be used for.[7]