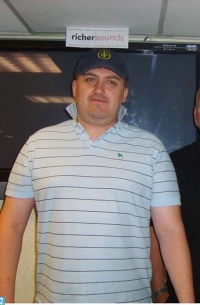 Jeff Marsh founded the Welsh Defence League.[1] In 2010 he was also an administrator of the Scottish Defence League's Facebook group where he uses the Pseudonym "Joe Cardiff".[2][3]

According to the Amazon profile for his book, Soul Crew Seasiders, Marsh grew up on Barry Island near Cardiff, where he became a member of Cardiff City's Soul Crew hooligan gang.[4]

According to Hope Not Hate, Marsh is a Cardiff City supporter and has been jailed three times for violence, including a two-year sentence for stabbing two Manchester United fans.[5]

The Times reports that Marsh has a degree in criminal justice.[6]

On the 5th March 2010 Jeff Marsh was banned from attending football matches for a period of five years after he was arrested for being in possession of a knuckleduster and had been fighting with Celtic fans after a match between Cardiff City & Celtic. Marsh was also given a four-month suspended jail term, 150 hours community service and ordered to pay £600 in court costs. In 1986 Marsh was convicted of a football-related assault in Halifax and in 1989 he was convicted of grievous bodily harm after stabbing two Manchester United supporters.[7]

According to the blurb for his most recent book From Seasiders to Casuals United - Birth of the EDL, published May 2010, Marsh claims he has turned his back on football violence. The book:

tracks his journey through the Mod v Skinhead days of the 70s, the formation of the Hooligan "firms" in the 80s, the naughty 90s and how he turned his back on football violence to help create the largest street movement this country has ever seen. Illustrated with many photos this book is an amazing insight into the hooligan mentality and the formation of the Casuals/Defence Leagues/EDL.[8]

Marsh is the founder of Casuals United[9] and its leader according to The Times, which reports that the organisation was formed following an Islamist protest at the Royal Anglian Regiment homecoming parade in Luton in March.[10]

Violence erupted at an English Defence League protest in Birmingham in August 2009 at which the Welsh Defence League and Casuals United were represented. Marsh told Wales on Sunday the following week: "Hooligans from rivals clubs are uniting on this and it is like a ready-made army."[11]

“It is not in our interests to go out and cause riots because we will get arrested and hit with Asbos,” he said.

“We do not look for violence but former football hooligans are able to defend themselves against trouble and are not afraid to protest when being pelted with missiles – like what happened in Birmingham.”[12]