Jay Byrne is Monsanto's former Director of Public Affairs and former Internet Outreach Programs Director. Prior to Monsanto, Byrne worked for USAID. Since leaving Monsanto, Byrne has become president of Internet PR company V-Fluence[1], whose former vice-president, Richard Levine, was previously part of the Monsanto team for Monsanto's Internet PR firm Bivings Group. V-Fluence is based, like Monsanto, in St. Louis. Monsanto is one of its clients.[2]

Byrne is believed to have been the chief architect of the covert Monsanto-Bivings PR campaign which involved attacks on the company's critics via front e-mails, such as those of Andura Smetacek and Mary Murphy, and material posted on the website of a fake agricultural institute, the Center For Food and Agricultural Research (CFFAR). CFFAR material, attacking Monsanto's critics, was also faxed to journalists and planted at a conference.

The campaign is believed to have been a response to the growing role of the Internet in Monsanto's marketing problems in the late 1990s. As Bill Lambrecht pointed out in a September 1999 article in the St. Louis Post-Dispatch:

The Internet is enabling mobilization like never before and, in the process, giving biotechnology companies fits. In recent months, St. Louis-based Monsanto Co. and its rivals in the new science of genetically engineering food have watched in dismay as pockets of protest have mushroomed... perhaps no single factor looms larger in biotechnology's tumble than the role of the Internet' [emphasis added].[3]

Byrne led Monsanto's counter attack. He is reported to have spent "a quarter of his time monitoring the Web for rogue and activist sites. He finds everything from activist sites to sites that provide even-sided discussions and debates about industry issues to those that paint Monsanto black."[4] Some of these he attempted to shut down. He gave advice to other PR professionals on the best ways to achieve this: "Anonymous sites often can be shut down by contacting the site's hosting company. To avoid any possible liability, hosting companies will shut down a site if they can't identify the owner, Byrne says."[5]

In February 2001 the owners of the monsanto.org site received a letter from Monsanto's lawyers telling them, "The information contained on your web site is defamatory, inaccurate and misleading". The letter also said, "if you do not immediately cease and desist from your conduct, as demanded by this letter, Monsanto will institute the appropriate proceedings against you without delay." Monsanto took legal action against the site in order to gain possession of the monsanto.org domain.[6]

Besides attacking critical sites, a significant part of Byrne's focus as an Internet strategist appears to have been on how to make Monsanto's case beyond the company's own websites and listservs. CS Prakash's campaign launched in January 2000 seems to have been of particular interest. According to one PR article:

The site's listserv (AgBioWorld) generates more than 2,000 subscribers. Byrne subscribes and offers advice and information when relevant and ensures his company gets proper play.[7]

Byrne's exact role in the Prakash campaign's emergence can only be guessed at but there is evidence that the AgBioWorld site was designed by Monsanto's PR company Bivings Group and its original e-mail archive was covertly hosted on Bivings' main apollo server. The AgBioView list prominently circulated emails from the fake citizens Andura Smetacek and Mary Murphy attacking Monsanto's critics. Murphy's mails have been traced back to Bivings and Smetacek's to Monsanto, as is detailed in Andrew Rowell's book, Don't Worry, It's Safe to Eat. 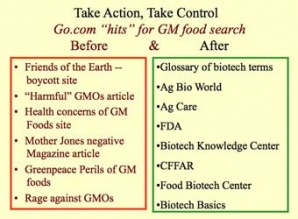 At the end of 2001 Byrne ran a PR industry workshop in Chicago which was billed by its organisers, Ragan Communications, as showing how Monsanto 'brilliantly outwits its opponents at their own game of guerilla PR.' Byrne's presentation was accompanied by a PowerPoint display.[8] One of Byrne's slides, headed, "Take action/Take control", illustrated Monsanto's work on a particular search engine. Listed are the top search results for "GM food" before and after Monsanto took action. All the "before" sites are critical of GM; the "after" sites were mostly created by Bivings and include the Center For Food and Agricultural Research - the fake agricultural institute promoted by Smetacek. 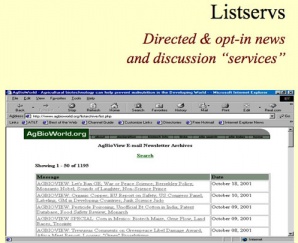 Another of Byrne's slides is headed "Listservs: Directed & opt-in". It contains a single image: a thread of messages on the AgBioView list. The implication would seem to be that Monsanto uses this list for strategic PR purposes. 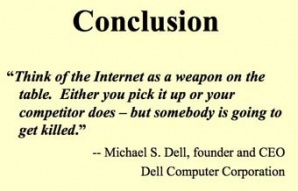 The content of Byrne's concluding slide is a quote: "Think of the Internet as a weapon on the table. Either you pick it up or your competitor does - but somebody is going to get killed."

Graydon Forrer and Philip Angell were colleagues of Byrne's at Monsanto.