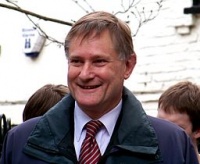 Bayley was born in Maidenhead, Berkshire and was educated at Haileybury, the University of Bristol, where he obtained a politics degree; and the University of York where he was awarded a degree Southern African Studies. After his studies in 1975 he became a District Officer and later a National Officer with National Association of Local Government Officers (NALGO). He was active in the Anti-Apartheid Movement in his student days and is a lover of jazz. He is married to Fenella Jeffers and they have a son and a daughter.

He was elected as a councillor in the London Borough of Camden in 1980. He became the General Secretary of the International Broadcasting Trust in 1982. Bayley stepped down as a councillor and moved to York to take up a post as senior policy lecturer at the University of York in 1986.

Hugh Bayley was nominated as the Labour candidate for York at the 1987 General Election but was defeated by just 147 votes by Conservative Conal Gregory. After the election, Hugh Bayley became a Health Economics Research Fellow at the University of York, and became a member of the local health authority. In the 1992 General Election in York, Hugh Bayley proved victorious, and on 7 May 1992 and joined the Health Select Committee. The name of the York constituency and its boundaries were changed slightly and Bayley was reelected with a majority of 20,000 at the 1997 General Election. A loyal New Labour backbencher, he resigned from the RMT union in 2002 after it said it would only fund MPs who would agree with its policies.