HG "Bert" Lawrenson was a senior officer in the Metropolitan Police Special Branch in the 1960s, who moved to the Economic League London Regional Office as soon as he retired in early 1969. As the head of 'C' squad he oversaw the gathering of intelligence on the Vietnam Solidarity Campaign in 1968, and he was closely invovled in the setting up of CI Conrad Dixon's Special Demonstration Squad (or Special Operation Squad as it was called in the early days).

The first known appearance of Lawrenson as a Detective Inspector - most probably from Special Branch - is in 1963. Activist group 'Spies for Peace' had released top secret details of the governments plans for 'Regional Seats of Government', which was picked up by the wider peace movement. As part of an effort to prevent further publicising of the details, the state issued various warnings. These included a visit from Detective Inspectors Wood and Lawrenson, to Peace News due to that newspaper's plans to publish the details. Despite this, Peace News put the story on it's front page.'[1]

Lawrenson was a Superintendent in charge of 'C' Squad later in the 1960s, according to a former colleague - having succeeded Harold Suttling in that role.[2] Dates are as yet uncertain, but he certainly held the rank of Superintendent by late 1967 and subsequent years.[3] Lawrenson was deputy to the then head of Special Branch, Chief Superintendent Arthur Cunningham.

In this role, he would have overseen Special Branch's intelligence gathering on political groups - its remit variously including Communists and Subversives/ Public Order / Domestic Extremism.[4][5][6] Lawrenson's former colleague, John Streeter in an obituary in 2014 puts it this way: "In those distant days one of the functions of ‘C’ Squad was to ‘monitor’ the subversive activities of extreme left wing organisations such as the CP, WRP, and many others doubtless still remembered with ‘affection’ by many of a certain vintage."[2]

1968 saw a mass movement against the Vietnam War, including large scale demonstrations in London. Special Branch played a key role in the police response to this,[7] including setting up undercover unit, the Special Demonstration Squad in late July that year, targeting the large scale 27 October mobilisation.[8] 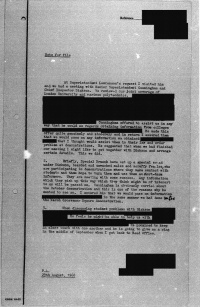 In doing so, the SDS had a close working relationship with the secret service from the very beginning, as was revealed in files released by the Inquiry in November 2020.

Lawrenson was personally involved in cementing this relationship. At a first meeting between Special Branch and MI5 was held on 1 August, the day after the creation of the Squad, the intention to cooperate was recorded. Present were Director F, F.1 and F.4 of MI5 and Commander Ferguson Smith, head of Special Branch), Chief Superintendent Arthur Cunningham and Chief Inspector Conrad Dixon. On 2nd August, Dixon and his deputy Inspector Philip Saunders visited the Security Service to tie up liaison arranchments, the SDS was to have a liaison at MI5, to see what would happen with the intelligence sent there.[9]

Next, it was Superintendent Lawrenson who invited MI5 to Special Branch to iron out the final details of the cooperation.[10] F.4 reports on the meeting with 'Senior Superintendent Cunningham and Chief Inspector Dickson [sic]', writing 'We reviewed our joint coverage of London University and various polytechnics'. It goes on to say:

Briefly, Special Branch have set up a special squad under Dickson, bearded and unwashed males and scruffy female, who are participating in demonstrations where they make contact with students and then hope to turn them and use them as short term informers. They are meeting with some success.

Lawrenson and the founder of the SDS DCI Conrad Dixon share a history of working at 'C' Squad. As such Lawrenson reported on groups active in the Anti-Vietnam war movement, even before the SDS was set up. In March 1968, after the first large demonstration against the war in Vietnam in London on the 17th, Lawrenson authored a report on a smaller protest a week later by Youth Campaign for Nuclear Disarmament.[11]

In the run up to the next large anti-Vietnam demonstration on 27 October 1968, Lawrenson's name appears on a number of reports on the activities of the Vietnam Solidarity Campaign submitted by DI Conrad Dixon; signing them as Acting Detective Chief Superintendent in place of (or on behalf of) the regular co-signer, DCS Arthur Cunningham. For example, in early October 1968, he signs a report of Dixon, on behalf of his Chief Superintendent, regarding the decision by CND not to support the Vietnam Solidarity Campaign's demonstration of 27 October and about the internal mood within the VSC.[12][13]

At the hearings of the Undercover Policing Inquiry in November 2020, one of the former SDS undercover officers mentioned Lawrenson in his witness statement.[16] Known as HN336 because his real name is restricted in the Inquiry, he used the cover name Dick Epps while he was undercover between 1969 to 1972. (He also appeared as 'Dan' in True Spies, the BBC series first revealing the existence of the SDS in 2002). When asked what he knew of the Special Branch and the Economic League, he said:

Shortly after I joined the branch, the then Chief Superintendent of C Squad, I think his name was Lawrenson, retired and he joined the staff of the Economic League, and I was aware of that.

Reference to 'the branch' is likely a mistake for the Special Demonstration Squad, which HN336 joined in early 1969, whereas he had joined Special Branch as a police constable in 1964.[16]

A search of the Police and Constabulary Almanacs shows that Bert Lawrenson had left around this date, as he is last recorded as a Metropolitan police officer in 1969, as an Acting Chief Superintendent.[3] (The Special Branch reports from March 1969 quoted above must have been amongst the last he signed.)

Mike Hughes, long-term researcher of the Economic League and the author of Spies at Work assumes that Lawrenson was appointed head of the League's London Regional HQ's research department after he left the police, and stayed in that role until 1980, when the London office was moved to Croydon and the League appointed someone called Derek Knight-Jewell, someone without a security background.[17]

Given his role in 'C' Squad, Lawrenson's move to blacklisting organisation the Economic League is concerning. He would have seen numerous intelligence reports on people who were being systematically targeted for their political beliefs and union work. His understanding of Special Branch officers and structures would also provide knowledge and contacts useful for the Economic League.

As Dave Smith, core participant in the Inquiry and co-author of Blacklisted[19] pointed out in his openening statement at the hearings in November 2020:[20]

"Dick Epps", the undercover officer who first mentioned Lawrenson, went on to work at the Industrial Unit covering the engineering industry after his deployment with the SDS ended.[16][21]

Looking at the timeline of his career and his personal details, it is highly likely that Lawrenson has passed away. No request for anonymity has been made by his relatives, he has no HN number and his name had not yet been mentioned in the proceedings in the Undercover Policing Inquiry. When HN331 mentioned Lawrenson in his witness statement, his name was not redacted; nor was it from the MI5 report on the meeting with Special Branch and the SDS, quoted here.

As a superior in 'C' squad, who arranged contacts with MI5 for the SDS at its invention, signed off SDS reports, who had been responsible for the Industrial Unit, before moving on the Economic League, one would expect the Inquiry to look at Lawrenson's role. Hopefully he will be on the agenda once the Inquiry gets to scrutinise the managers of the SDS for this period, in late 2021.

Curiously enough, the files disclosed by the Inquiry in November 2020 did not include any Special Branch reports that were written or signed by him (- or they must have been redacted, which would not make sense as his name was available in other documents).

The Special Branch files quoted in this profile were released to journalist Solomon Hughes, after a Freedom of Information request in 2008; he published two articles about them in the Morning Star.[23] Paul Mason saw a similar set of files and wrote about his Newsnight report at the BBC website, detailing for instance how the pop group The Doors were mistaken for political extremists.[24]

Hughes kindly shared his files with the Special Branch Files project where they have been available for the past five years. Most of these Special Branch files have not been redacted at all and include both names of police officers involved as the activists they spied on, as opposed to the files released by the Inquiry. 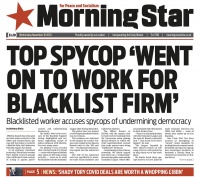 Lawrenson on frontpage of the Morning Star, 18 November 2020.

The disclosure of the Inquiry does not include any of the files previously released under the Freedom of Information act, or available at the National Archives.

The importance of the mention of Lawrenson in the statement of HN336 / 'Dick Epps', was immediately recognised by campaigners and those spied on. Core Participant Dave Smith of the Blacklist Support Group discussed it in his Opening Statement.[20]

This in turn lead to stories in for instance the Guardian[25] and made the front cover of the print edition of the Morning Star of 18 November 2020.[26]