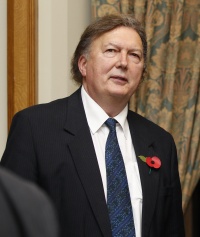 Knight's constituency includes 14 oil and gas licence blocks, awarded by the Oil and Gas Authority under its 14th licensing round in 2015. Ten of these licenses went to Cuadrilla, three to INEOS and one to Europa. There are plans for a total of 10 shale wells, five hrz frac wells and for 2D and 3D seismic surveying. [2] No applications are currently underway.

In response to the new licenses, Knight said:

'I think it would be highly improper if we were to develop any industry in the Wolds. I would hope the planning authority in due course takes into account this is an area of outstanding natural beauty. I would be very concerned if this was to proceed further.' [3]

Nevertheless, Knight failed to show up for a critical Westminster vote in December 2015 on the regulations on fracking in 'areas of outstanding natural beauty'.

In February 2016, an open letter was published in a local newspaper imploring Knight to take a strong stance against fracking in Yorkshire. [4]

As of 2019 Knight's website states that he 'is not an advocate of fracking' and believes communities 'should have the final say' on whether fracking goes ahead in their areas. [5]

Knight has voted against greater regulations on fracking. [6]