George Patrick John Rushworth Jellicoe, 2nd Earl Jellicoe, KBE, DSO, MC, PC, FRS (April 4, 1918 – 22 February 2007), was the longest serving member of the House of Lords, having succeeded his father, the First World War naval commander Lord Jellicoe, in 1935 and come of age and taken his seat in 1939. Jellicoe was active in a number of policy planning groups such as the pro-NATO, European Atlantic Group, as well as being a member of the secretive dining club The Other Club.

BBC Radio 4 have the following summary of George Jellicoe's life:

Earl Jellicoe was one of life’s more colourful characters, a man who played out various roles; he was fearless wartime commando, a dashing foreign office diplomat, and a Cabinet minister whose political high life was cut down by a sex scandal. In 1973 he was forced to admit to using prostitutes in the wake of the Lord Lampton call-girl story. George Jellicoe was born into a family of wealth and power. The Son of Earl Jellicoe, the Admiral of the Fleet, his Godfather was King George V and he served as a page at the coronation of George VI. Jellicoe inherited his father’s title in 1939 but earned for himself a reputation for courage and leadership over the next five years. As a commando with the SAS, Earl Jellicoe led a series of daring raids throughout Nazi-occupied southern Europe. There are Boys Own tales of Jellico disguising himself as a drunken peasant whilst on a secret mission in Crete; he led a raid which destroyed 20 German bombers on the ground; he was among the first wave of Allied troops which retook Athens, having arrived in the Greek capital on a borrowed bicycle. After the war he joined the Foreign Office and, despite having first sat in the House of Lords in 1939, didn’t make a maiden speech till 1958. He forged a reputation as an ebullient man in his public and private lives.[1]

During the Second World War he served with and then commanded the Special Boat Section and was among the first Allied soldiers to enter German-occupied Athens.

According to the blurb for a biography of Jellicoe:

George Jellicoe has enjoyed power and privilege but never shirked his duty. His war exploits are legendary and, as a founder member of Stirling's SAS and first Commander of the Special Boat Service, he saw action a-plenty. A brigadier at 26, he liberated Athens as the Germans withdrew and saved Greece from a Communist revolution.[2]

Shortly after this Jellicoe became chairman of the large sugar company Tate & Lyle. The sugar company and its directors were among the most enthusiastic backers of the Economic League all the way through its history even when it was forced to dissolve and reappear as Caprim. Jellicoe's involvement in the SAS/Special Forces and overseeing of the work of the League show the continuity of the work of organisations like Hakluyt.

From 1983 to 1986 he was Chairman of the British Overseas Trade Board.

Lord Jellicoe is a former chancellor of Southampton University and has been closely associated with research and higher education. He became a Fellow of the Royal Society in 1990. 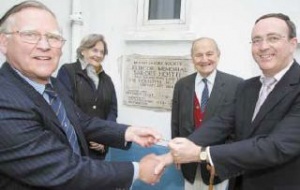 Lady Jellicoe and Earl Jellicoe in the background as BISS Chairman, Ross Sinclair presented the key to the old Seafarers' Centre to Steve Wilks, managing director of Barratts Southampton division

Jellicoe has long links with the British and International Sailors' Society and oversaw the closing ceremony for the Orchard Place BISS centre in Juy 2005. The BISS reported: 'Like his father, [Jellicoe] became First Lord of the Admiralty, as well as leader of the House of Lords. He went on to head the Civil Service and more recently served as President of the Royal Geographical Society.'[4]

From House of Lords Register of Interests (2006)