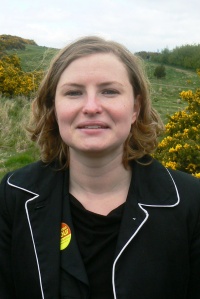 Gemma Doyle was the Labour Party member for Parliament (MP) for Dunbartonshire West from May 2010 to 2015.[1]

In the 2015 general election Doyle lost her seat to the Scottish National Party's Martin Docherty by 14,171 votes.[2]

She is now a political consultant with Global Partners Governance, including 'training MP’s staff and public affairs professionals interacting with Westminster and the EU.'

Doyle was born in 1981 in the Vale of Leven Hospital. She grew up in Dumbarton where she attended St Patrick’s Primary and Our Lady and St Patrick’s High School.[1]

Doyle attended the University of Glasgow, where she, graduated with an MA in European Civilisation. During University she worked behind the bar in the Dumbuck Hotel and as a cleaner in a Glasgow hotel.[1]

She joined the Labour party aged 15 and served on its Scottish Executive and National Policy Forum before being selected as Labour’s candidate in West Dunbartonshire in 2010.[1]

Doyle is is a Shadow Defence Minister, with specific responsibility for defence personnel, welfare and veterans.[3]

Doyle sponsored the Westminster launch of the Henry Jackson Society report In Scotland’s Defence? An Assessment of SNP Defence Strategy, on 4 July 2013.[5]