GSV is a US venture capital fund that invests heavily in education technology start-ups, among other things.

Its founder CEO is Michael Moe.

The company lobbies for the increased use of technology in teaching and learning.

Two published reports – one by Moe, the other by Moe's previous company – provide real insight into the push for more commercial edtech in schools. They detail the investment opportunity; outline lobbying and PR stratgies for the education reform lobby; and clarify the central role that standardised testing and the US government's schools 'accountability agenda' play in growing the education technology industry.

Companies in GSV's edtech portfolio as of August 2015 include:

In 2005, Michael Moe's previous company, investment bank ThinkEquity Partners, published a report on the investment opportunities it saw in the US education system. New Rules, New Schools, New Market: K12 Education Industry Outlook 2005 is a useful introduction to how the investment world views education, which is as a profitable market, albeit one that they hope will benefit from their investments; and the factors driving these opportunities. The report, which is a decade old (in 2015) begins:

'We believe the U.S. K12 school system is undergoing structural changes that have the potential to redefine and expand the role of business in the $500+ billion market over the next decade.

It puts the 'domestic business opportunity' in the primary and secondary school market, known in the US as 'K12' (Kindergarten to twelth grade), at $163 billion by 2015 'as the K12 market moves into an age of data, efficiency, technology and globalization'. 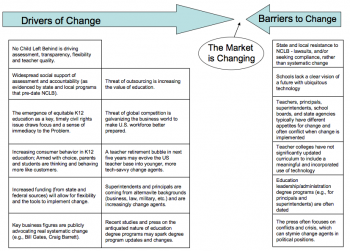 Businesses wanting to get involved in state education, including those that see technology and the digitisation of teaching and learning as the answer, face numerous hurdles, the report notes:

How to crack the market then?

First define 'The Problem' (to which more involvement from business is the answer).

The report identifies the problem with the US public schools system as: 'stagnant student outcomes', the achievement gap between racial and socioeconomic groups, globalisation and the threat of outsourcing. It notes that these factors 'all meant the stage was set for a major, top-down, sweeping reform package' at the turn of the century.

President Bush responded in 2001 with a set of new policies, named 'No Child Left Behind', which tied funding to market reforms: school choice, an increase in assessment and a reliance on data to improve accountability. The report notes that Bush's reforms initially had little impact.

However, the report saw positive signs that the system is changing, and becoming more attractive to investors.

Investment opportunities as a result of this focus on results/outcomes, more testing, and holding schools and teachers to account from that data include:

Additionally, a new focus on school choice and 'alternative routes to education' will create opportunities to make money from:

Finally, with fewer barriers to technology in classrooms and a more tech-savvy workforce, investors will be able to profit from products that provide:

'As a result of these trends, we believe the system will finally enter the 21st century in the coming decade. When it does, we believe the $500-plus billion US K12 education system will be more closely integrated with the business world, allowing for numerous, long-legged investment opportunities.'

'What to be excited about'

In summary, the report identifies the following as reasons investors should be 'excited' about the US public school market:

In short, what the report is saying is this: forcing schools to collect and publish standardised test results data, under the guise of accountability, leads to opportunities to profit for education technology companies.

However, crucially, the report also notes that there is no evidence to show that technology raises test results.

'Has this impressive level of investment produced the real intended results – a better educational system?.. student outcome data is mixed. It has been difficult to link any positive test score data to increased use of technology in schools as standardized tests have changed over time (making year over year comparisons difficult). Meanwhile, some independent longitudinal studies have revealed stagnant student outcome data… In the end, it is difficult to evaluate the benefit of technology in real life situations.'

Rather than cause schools to pause before investing heavily in technology, or a change in government policy, the report argues that the lack of evidence means that schools have not digitised enough.

'… placing devices into classrooms is only the first step in the process of integrating technology into classrooms. We believe that our society’s belief in the transformative power of technology will continue to drive investment for the next decade. What the criticisms do bring to light, however, is the need to make the existing technology infrastructure more productive. This implies… a shift in investing from hardware and one-off software applications to large, rationalized technology systems which incorporate and enable individualized instruction, new curriculums and adaptive learning methods.'

Ten years on from this report, the drive to push more technology into teaching and learning has intensified. What the report makes clear, however, is that this is less about the stated aims (of government and companies) of raising standards through increased transparency and teacher and school accountability, and more about increaing the profits and value of the education technology industry.

In 2012, perhaps frustrated by the pace of change in schools, GSV founder, Michael Moe published American Revolution 2.0’’, a blueprint for radical reform of America's education system':

'It should not be lost on us that revolutions are actually a fairly common occurrence in modern society. The most recent prominent example is the “Arab Spring,” but since 1900, there have been over 250 governments overturned by revolutionary action... The revolution America needs today is not against an oppressive monarchy, but rather against an educational system that has equally oppressive effects. Fortunately, we have the arms and technology to fight this war.[1]

'The revolution GSV goes on to describe is a battle to control the fate of America’s K-12 education system. Noting that this money is still controlled by public entities, or what’s referred in the document as “the old model,” the GSV paper calls for reformers to join the “education battlefield.” (A colorful diagram depicts “unions” and “status quo” forces equipped with muskets across businesses and other “change agents” equipped with a fighter jet and a howitzer.) The GSV manifesto declares, “we believe the opportunity to build numerous multi-billion dollar education enterprises is finally real.”'[2]

The manifesto includes a chapter titled 'Time to Fight' (which is followed by a quote from the film The Untouchables: 'He pulls a knife, you pull a gun. He sends one of yours to the hospital, you send one of his to the morgue.') It includes case studies profiling education technology business - the 'Special Forces' of Moe's revolution – a large number of which are in GSV's investment portfolio.

It concludes with a series of 'battle strategies', which it believes will bring about radical, technology- and market-driven education reform ('We believe that capitalism works,' it reads, adding that 'market forces will do a lot of the heavy lifting').

The 'battle strategies' include: 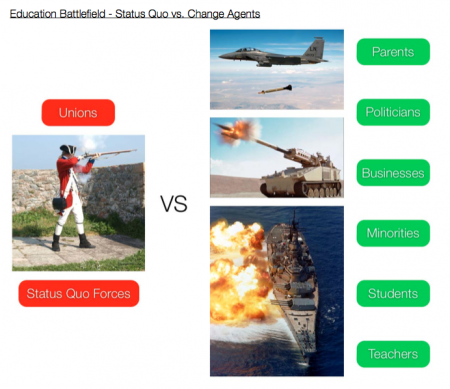 The rhetoric of Moe's 2012 report 'American Revolution 2.0' is strikingly different from the 2005 investor report. This is now a call to arms; a moral quest; a social imperative. The reforms are no longer presented as exciting and profitable investment opportunities; it has become about saving America from decline and its people from failure.

'Today, we stand on a precipice and must decide to jump or cower and hope our challenges are magically solved. We could allow chaos and class warfare to dismantle the institutions that hold our society together. Conversely, we can choose a positive direction. We can provide a path for participation, reinventing, revitalizing, and revolutionizing education.

The 'sell' may have changed. The reforms, however, are the same.

GSV has political links in the following people:

'Education technology investment is closely aligned with education reform efforts. As such, ed-tech investment shouldn’t simply be read in terms of the “business of ed-tech” but is also connected to the “politics of ed-tech.”'[4]