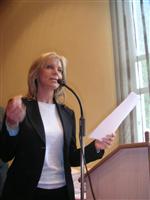 Frédérique Ries (born 14 May 1959 in Balen) is a Belgian MEP and Vice-President of European Friends of Israel; she is Belgium's former Secretary of State for European and Foreign Affairs. She was an instigator of a motion to implement "strong economical sanctions against the Iranian regime" (July 2007). She also has been the leader of several EFI tours to Israel.

Ries represents the French Community of Belgium with the Mouvement Réformateur/Mouvement des Citoyens pour le Changement/Parti Réformateur Libéral, part of the Alliance of Liberals and Democrats for Europe; She is a substitute for the Committee on Foreign Affairs and a member of the delegation for relations with Israel.