Estimating network size and tracking information dissemination amongst Islamic blogs is a report published by the Research, Information and Communications Unit of the Home Office in March 2010 based on research completed in April 2008 by the University of Nottingham academic Dr. David Stevens.

The report was the product of a £27,666 Economic and Social Research Council grant given to Dr David Stevens to study 'radical blogs'. The project was titled Communications Streams and Radicalisation and was conducted from January to March 2008, in collaboration with the UK Government's 'counter terrorism' group the Research, Information and Communications Unit (RICU). The description of the grant given on ESRC's website stated:

The purpose of the placement is to conduct a study of radical weblogs (‘Blogs’) over the period of the placement, as well as to provide more general advice and assistance on RICU business. The nature of this study is somewhat sensitive. Consequently, the exact aims and outcomes of the project will not be publicised.[1]

It is clear from this description that the interest is in 'radical' blogs and the title of the project includes the term 'radicalisation'. This is of course what RICU was interested in. However, when the research came to be published the title referred only to 'Islamic' blogs. The lack of differentiation between 'radical' and Islamic' is carried all the way through the report.

At the heart of the difficulties of the report is the failure to distinguish between ‘Islamic’ and ‘radical’ blogs. ‘The purpose of this project’, writes Stevens, ‘is to study the link patterns and discussions of Islamic bloggers with particular reference to the UK’. ‘Islamic’ bloggers, as opposed to ‘Islamist’ or ‘radical’. The confusion runs all the way through the report. Table One[2] indicates the use of language throughout the report 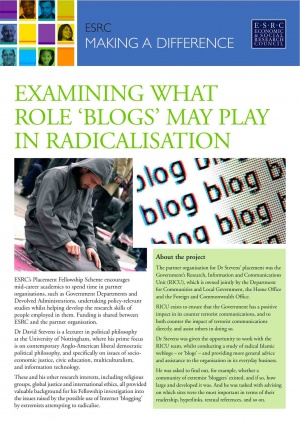 Front page of ESRC briefing on the research project run by David Stevens of the University of Nottingham in which he examined 'Islamic' blogs after a placement at the Home Office counter-terrorism Research, Information and Communications Unit. Note the picture of a praying Muslim male, indicating the difficulty of distinguishing between ordinary Muslims and 'terrorists'.

The confusion between Islam in general and ‘radicalisation’ specifically was carried over into the promotion of the report by the funding agency the Economic and Social Research Council which published a two page glossy leaflet as part of its Knowledge Transfer work. This featured a picture of a bearded Muslim man at prayer on the first page, next to the headline containing the word ‘radicalisation’.[3] The ESRC had commissioned the summary from an outside contractor. Freedom of Information disclosures from the Council show that the typesetting company had specifically queried the use of the image in an email to the Council: ‘I’m not sure if the left-hand image on the front might be a bit contentious – see what you think and let me know’.[4] The Council responded: ‘this is fine’ and publication went ahead. [5]

The report published a list of the top 20 ‘Islamic’ blogs with the inference that these were in some senses ‘radical’ or perhaps supportive in some way of ‘Jihad’ or ‘terrorism’. Among those on the list were a number of blogs which can only be described as 'radical', as ‘Islamic’ or even as 'blogs' tenuously or by distortion. The Guardian noted a number of examples:

the man identified in the report as Britain's third most influential "pro-Islamic" blogger is actually an atheist based in the United States. As'ad AbuKhalil, a Lebanese-American professor of political science at California State University who blogs as The Angry Arab is furious about it. "How ignorant are the researchers of the Home Office?" he writes. "How many times does one have to espouse atheist, anarchist, and secular principles before they realise that their categorisation is screwed up?"
He suspects that his blog was included because of its name. He rarely talks about religion on his blog, except when mocking the fatwas issued by reactionary clerics.
Top spot in the league table of Britain's most influential "pro-Islamic" bloggers goes to Ali Eteraz, a Cif contributor. Back in 2007, he wrote a series of articles for Cif, from a liberal perspective, about reforming Islam.
Islam in Europe, listed as the second most influential blog, is not what many people would think of as a proper blog. It's basically a collection of news reports from the mainstream media about – well, Islam in Europe.
Another Cif contributor, Yahya Birt, is included in the list at number six. [6]

The first blog on the list is that of Ali Eteraz, a Pakistani lawyer and novelist, whose book made it to Oprah’s gilded book list. He has contributed online for Jewcy, a website which The Guardian called "a cultural icon at the forefront of a new wave of Jewish culture and pride", and the Huffington Post.

Edip Yuksel, a leader in the American Islamic reform movement, says Eteraz is the last man to be associated with terrorism. "Listing Ali's name in a research to track terrorists is a travesty of truth. Muslim intellectuals like Ali are our best hope for global peace, justice and progress," Yuksel said.[7]

We can also note that number 8 in the top 20 is the blog ‘Rolled up Trousers’. This is the personal blog of Osama Saeed, the Scottish National Party candidate for the constituency of Glasgow Central in the 2010 General Election. He is outspoken in his condemnations of ‘Islamist’ and other kinds of ‘terrorism’ as well as being a leading Scottish anti-war campaigner and anti-racst activist.[8] He is a ‘muslim’ but to describe his blog as ‘in some way related to 'radicalisation' suggests yet more muddle and a sleight of hand which smears opponents of UK government foreign policy as being somehow supporters of terrorism.

So at least five of the top tem 'Islamic' blogs are questionable. In addition the link patterns that were discovered from these allegedly 'radical' blogs were predominantly to the mainstream media:

One of Dr Stevens' discoveries was that the bloggers in question mostly link not to militant websites but to articles in the New York Times, al-Akhbar (a Lebanese Arabic-language newspaper), the Guardian, the BBC and the Israeli newspaper, Ha'aretz.

You may be wondering what al-Akhbar is doing here and why seems to be so popular. The explanation is simple: The Angry Arab writes for al-Akhbar and his blog links to it constantly. Since he sometimes posts as many as 10-12 one-paragraph items on his blog in a single day, al-Akhbar scored 95 mentions during the study period, compared with 88 for the Guardian and 80 for the BBC.[6]