Erio Barale-Thomas is a toxicologist. He is president of the Administrative Council of the Société Française de Pathologie Toxicologique (SFPT, French Society of Toxicological Pathology). Barale-Thomas describes the SFPT as "a non governmental/non profit organization formed by veterinarians, physicians, pharmacists and biologists specialized in veterinary and toxicologic pathology".[1]

It was as spokesperson for SFPT that he wrote a letter to the editor of the journal Food and Chemical Toxicology, condemning "weaknesses" and "deficiencies" in the paper of Prof G. E. Séralini (2012), published in September 2012 in the same journal.[2]

In his letter, Barale-Thomas takes Seralini to task for failure to declare a conflict of interest in his paper, namely the fact that Seralini is president of CRIIGEN, the independent research group based in France, which contributed funding to the research. CRIIGEN's contribution to funding the study was declared in the paper.

However, in his letter condemning Seralini, Barale-Thomas seems to have been less than open about his own conflicts of interest. He gives his affiliation in the letter only as president of the SFPT. But his LinkedIn page (29 November 2012) tells a different story. It states that since 2003 to the present he has been principal scientist at Janssen Biotech, which is part of the Janssen Pharmaceutica group of companies that belong to Johnson & Johnson.[4][5] 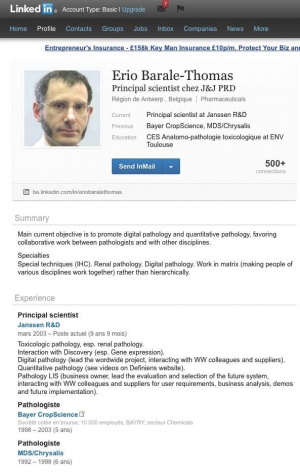 Confirming this position is a video "customer testimonial" by Barale-Thomas for digital technology, in which he is described as "Erio Barale-Thomas (Johnson & Johnson Pharmaceutical R&D, Beerse, Belgium)".[6]

Prior to joining Janssen he was a pathologist at the genetically modified crop and chemical company Bayer CropScience (1998-2003).[7]

So Barale-Thomas has a vested interest in reassuring the public about the safety of genetically modified organisms, which are central to Janssen's interests and to his own position – and in attacking Seralini's study, which cast the safety of GMOs into doubt.

In his critique of Séralini's study, Barale-Thomas argues that Séralini used too few animals (ten per sex per group, total of 20 per treatment group) and that his experiment was thus "underpowered"[8] – in other words, too weakly designed to justify conclusions drawn.

Yet in the GM industry's own experiments on GM foods conducted to gain regulatory approval, including Monsanto's 90-day study on the same NK603 maize that Séralini tested, only ten animals per sex per group, the same number that Séralini used, are analysed for blood and urine chemistry.[9][10] Furthermore, the GM company is free to choose which ten to analyse, allowing selection bias to enter the experiment and invalidating the results.

In an example of double standards, Barale-Thomas weighed in on the European Food Safety Authority (EFSA) consultation on the design of these industry feeding studies on GM foods, complaining that the number of animals proposed for these experiments was too high. EFSA’s proposed 96 animals compares unfavorably in terms of experimental power with Séralini’s 200. But Barale-Thomas wanted EFSA to return to its previous suggestion of 80 or fewer.[11]

Smaller numbers of animals make experiments cheaper for industry and mean that a toxic effect is less likely to be seen, as the small groups of animals may not be representative of the larger population. Thus they increase the chances of 'false negatives', where a real toxic effect is missed.

Barale-Thomas might reply that Seralini’s was a long-term experiment: he uses the word "long-term" in his complaint about Seralini's experiment being "underpowered" in his letter to the editor.[12] The implied argument is that in a long-term experiment, more rats are likely to die or get ‘spontaneous’ tumours as they age; so higher numbers of animals are required to ensure that the results are related to the treatment and not just the effects of old age. But then he claims that the Organisation for Economic Cooperation and Development (OECD) guidelines recommend using groups of at least 50 animals per sex per group "for the results to be considered valid".

The OECD itself stipulates that the reason why it requires 50 animals per sex per group for certain protocols is "in order to increase the sensitivity of the study”, in other words, to ensure that a real toxic effect is not missed by an insensitive study with too few animals. The aim is to protect the public from a 'false negative' or false conclusion of safety.[19] Insensitivity of study design was not an issue with Seralini's study, as toxic effects were found.

And unlike the industry studies submitted in support of marketing a product, which are supposed to conform to OECD protocols in order to protect the public, Seralini's study was not performed to support marketing of a product, but to investigate toxicity. So it is irrelevant to apply OECD protocols to his study.