Elizabeth Crossick, a trained lawyer and lobbyist, is deputy director of APCO Worldwide’s Brussels Office, a post she took up in October 2011.[1] Prior to her APCO appointment Crossick had been a consultant at Goodbrand, an international sustainability and social responsibility consultancy between 2009-2011,[2] a drinks lobbyist with Brown-Forman (and at the same time chair of the drinks industry lobby front the European Forum for Responsible Drinking - 2007-2009), a lobbyist with elite EU law firm Freshfields Bruckhaus Deringer (1996-2006) and a director of the Brussels think tank the Belmont European Policy Centre/European Policy Centre (until 1996).[3] 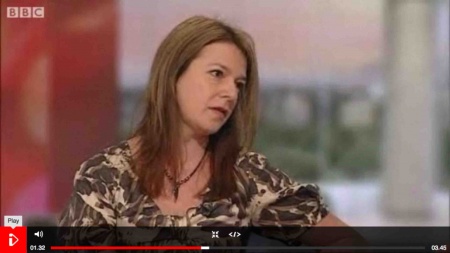 Crossick is the daughter of Stanley Crossick the 'godfather' of Brussels lobbying. She attended the City of London School for Girls[5] and went to University (1983 – 1987) at the School of Oriental and African Studies, University of London.[6] where she gained an LLB, Law & Comparative Law[7] and 'qualified as a barrister in 1987'.[8]

In October 2011 Crossick became deputy director of APCO Worldwide’s Brussels Office. This role sees Crossick work with Paolo Nicoletti the APCO Brussels managing director and Michael Burrell vice-chair for Europe. [1] APCO Worldwide is a lobbying firm born out of the Washington-based tobacco industry law firm Arnold and Porter, from which it derives its name. [9] Public Affairs reported that since leaving Brown-Forman in 2009 'she has spent the past two years doing consultancy, including for Brown-Forman.' [1]

Crossick was a 'partner'[7] at Goodbrand, a international sustainability and social responsibility consultancy in 2010 and 2011.[2] According to Goodbrand in November 2011 Crossick joined 'two years ago as part of the Insights Team.' This followed '10 years with the law firm Freshfields Bruckhaus Deringer and then three years in industry'.[2]

Crossick seems also to have worked on a freelance basis after leaving Brown-Forman. Public Affairs News reported in October 2011 that 'she has spent the past two years doing consultancy, including for Brown-Forman'.[1] Her LinkedIn page notes that she was a consultant at EFI at some point in 2011.[7]

In January 2007 Crossick joined Brown-Forman, [10] where she served until late 2009.[11] There she was head of European government relations and social responsibility for the US drinks company, owners of Bacardi. Crossick's job was a newly created post at a time when excessive drinking and subsequent harm threatened to provoke profit harming regulations from policymakers. Crossick’s role with Brown-Forman involved lobbying politicians in Westminster and Brussels in a bid to stave off tougher alcohol control in the UK and Europe. [12]

Between 2007 and 2009, while working at Brown-Forman, Crossick held the chair at the European Forum for Responsible Drinking (EFRD)[13]

According to her successor in the post Guillaume de Guitaut, global public affairs director at Moët-Hennessy, who was appointed in November 2009, Crossick had made 'excellent progress' during her tenure, 'most notably in developing tools to promote responsible drinking across Europe and in encouraging the industry to adopt responsible standards in commercial communications through self-regulation.'[14]

While employed at Freshfields Crossick was a member (at least in 2005) of the Society of European Affairs Professionals, an individual membership organisation for lobbyists that lobbies against transparency.

Crossick is the daughter of Uber-lobbyist Stanley Crossick (who died in 2010). He co-founded the European Policy Centre think tank in 1997. According to Public Affairs News Elizabeth also 'worked for' the EPC.[1] Stanley Crossick was regarded as one of the most influential European lobbyists and is credited with shaping the profession in Brussels. This appears to have been in its early years around 1996. For example, a brief note from 1996 on the predecessor of the EPC the Belmont European Policy Centre gives Elizabeth Crossick as one of the two contacts for the think tank.[17]

On disclosing the fees paid for lobbying Crossick told EurActiv

I don't think the size of the fees has anything to do with whether the pressure has been exerted badly or not, or in the wrong way, frankly. The fact that clients pay fees for lobbying is part of the democratic architecture. And I also think this is a very dangerous path to go down, because how are we going to prove the fee levels? Is somebody going to go and check the fees invoices? And then there will be incentives for blowing them up![18]

When Crossick was asked whether she thought that if the EU’s Transparency Initiative (launched in 2005) became law would deter dubious or 'border line' lobbying she said:

There are bad guys in every profession. If you've got somebody who is prepared to break up the law, all laws in the world won't stop him from doing so. What all this does is drawing the attention of a number of people about what is expected of them. I think there is the case here of lots of people not breaking the law voluntarily, but mostly not realising that what they are doing is close to the line. It is not because they want to break the law, or because they are evil, but because of cultural differences.[18]

Earlier in the interview Crossick had tried to define what she meant by cultural difference:

For example: when is something a gift? If a parliamentary assistant is kind enough to open up the door to your client, do you send her flowers afterwards to thank her, if it is a woman? Southern Europeans would say absolutely! But the Scandinavian reaction would be absolutely not in any way! So, no matter how much regulation you do, you cannot change cultural ways of doing things.[18]

Opposition to binding regulation of alcohol

Crossick was interviewed by EurActiv in her role as chair of the European Forum for Responsible Drinking (EFRD). Crossick discussed self regulatory guidelines for internet marketing, arguing that self regulation is quicker than legislation and that the drinks industry has no interest in marketing to young people. [19] Crossick explained that since 2004 members of EFRD have adhered to a self regulatory code of conduct that included age verification for entrance to alcohol company websites and using responsible drinking slogans. Crossick describes age verification as 'the best practice recognised by the European Commission'.[19] In 2009 developments in the 'on-line environment' have led to the industry developing new self regulatory standards. According to Crossick these include:

Companies should not target promotional activities at minors and ensure that when we do advertise through particular media 70% of consumers are over 18. We also avoid using cartoons and sporting figures that might be attractive to minors. Companies must not show consumption of alcohol and driving, nor should they make any health claims – like suggesting drinks give an energy boost, for example. Companies should avoid using celebrities whose primary appeal is to young people in promoting their products. Similarly, young models and other images that might appeal to youth should be avoided.[19]

When asked if real punishment for those who break the code was an option Crossick responded:

It's embarrassing for companies who are found to have breached the guidelines. They have to sit down at meetings with their peers and nobody wants their industry peers to see them as having failed to stick to the guidelines. In addition, there are national enforcement mechanisms for those who break national advertising standards. There could be penalties, depending on the national situation, but EFRD doesn't directly punish members. Again, we don't foresee a situation where a company would set out to break the rules.[19]

When challenged on the industry's past misdemeanours, and particularly for marketing 'alco-pops' Crossick does admit that 'they have – in hindsight – probably not marketed these products appropriately'[19] but denied the industry deliberately targeted children. The interviewer points out that the names of some products and brightly coloured labels were bound to appeal to the young.

EurActiv: Isn't there marketing research on what attracts young people to purchase products?
The problem is that we don't know, because we cannot conduct market research on younger people. I don't think the aim was to attract teenagers with those products. In any case, we learned a lot from that experience.

EurActiv: Doesn't that episode suggest legislation rather than self-regulatory guidelines are the best way to ensure good behaviour by industry?
Speed is of the essence with this. The difference between drafting legislation and putting together an up-to-date set of industry guidelines is that we can get things done quickly. Within a matter of months, we were able to begin this process, consult with members and involve stakeholders and publish an updated set of guidelines that takes account of existing technology. We began last spring, invited input from 39 organisations and can now present the results. [19]

Opposition to restricting the promotion of alcohol

On the 19th of October 2009 Elizabeth Crossick in her role as chair of the European Forum for Responsible Drinking participated in a debate organised by The Debating Group at a committee room in the House of Commons. The debate was sponsored by the Institute of Sales Promotion and chaired by John Greenway, Conservative Party MP for Rydale. The subject was “Prohibition of alcohol promotions will not encourage consumers to change their behaviour and drink sensibly”. Crossick argued that the Prohibition of alcohol promotion would be impossible, ineffective and even difficult to define. She went on to say that promotion of alcohol could be defined so widely that it could include labelling or packaging. The use of the word ‘prohibition’ in the debate title led Crossick to speak about the failures of prohibition in the US 75 years ago, before she went on to deny that evidence supported a promotions ban as an effective policy tool. In summing up her contribution Crossick, said she too worried about the effects of alcohol on her own children, but that prohibiting promotions would not make them safer and continued to support the idea of government, industry and NGOs working together on alcohol control. [20]

Former Vice President of the British Chamber of Commerce in Belgium and Chair of its EU Committee in 2004, with her term ending at the end of 2005.[21] [8]