Eligo International is a public relations company set up by Anthony Bailey in 1997.

"a dynamic and well-established public relations and public affairs company offering its clients innovative, creative and competitively priced communications solutions. Our experienced team of communications experts are engaged in developing and pro-actively executing the communications needs of statesmen and public figures, governments, diplomatic missions, senior corporate and industry leaders at home and abroad. From our inception, this has embraced all aspects of client communications including media relations, political lobbying, issues and crisis management, economic, trade, tourism and cultural promotion, co-ordination of VIP visits, as well as personal profiling and reputation management programmes"[1]

Like New Labour, Anthony Bailey's little outfit really started in 1997 'Eligio' means 'to elect'. Since then his clients have been from Saudi Arabia, including "essential elements of the Official Visit of HRH THE PRINCE OF WALES to Saudi Arabia (2001)." In the corporate field "Anthony has worked under contract to BAE SYSTEMS, SHELL INTERNATIONAL". Eligo's website makes it clear that the work of the agency is also about art and culture:

"From 1999+ Anthony has been appointed Chairman of the Advisory Group of the Painting and Patronage royal initiative which in 2000 and 2001 brought together HRH THE PRINCE OF WALES AND HRH PRINCE KHALID AL-FAISAL in the largest-ever cultural exchange between the United Kingdom and the Kingdom of Saudi Arabia. In 2001 Anthony was awarded the CERTICIFATE OF RECOGNITION by the International Public Relations Association for his work in creating this major cultural initiative."

And "Anthony is a longstanding supporter and member of the British LABOUR PARTY as well as a member of his local constituency party in Westminster." Bailey is also an active member of the Labour Finance and Industry Group and is Chief Policy Adviser of the Party’s international think tank, the Foreign Policy Centre. He is active in supporting the Labour Party’s government polices especially in the areas of education, prison reform, inter-religious and community programmes. Previously he was a Media Adviser to Manning, Selvage and Lee Limited, (1996) Senior Account Director of Burson-Marsteller Iinternational (1991-1995) as well as Program Manager of Management Communications at IBM Europe Middle East And Africa in Paris (1995). Anthony was a freelance journalist for a number of national and international newspapers and magazines from 1988-1998. Eligo say they work for the Foreign and Commonwealth Office). His Holiness Pope John Paul II knighted Bailey as a Knight Commander of the Pontifical Order of Pope Saint Sylvester (HOLY SEE) and Knight of the Equestrian Order of the Holy Sepulchre, (HOLY SEE).

Eligo's Painting & Patronage in London and in Riyadh (where would renaissance art be without the Borgias?) brought together the public and artistic capabilities of HRH The Prince of Wales and HRH Prince Khalid Al-Faisal bin Abdul Aziz Al-Saud. As a result of the success of Eligo and its business partners, "Painting & Patronage was heralded both officially and publicly in the media as the largest and most successful cultural exchange programme ever between Great Britain and Saudi Arabia and its dynasties." Apart of course from the Al Yammamah deal, which has nothing to do with this and to absolutely prove this:

"So as to continue the good efforts of the exhibition, a free entry summer school for students was established through Eligo with The Prince’s Foundation and the King Faisal Foundation. Eligo ensured through its sponsorship capabilities the sponsorship of both BAE SYSTEMS and Shell."

Although if you did want to use some art-stunt to sell arms for oil:

"Eligo researches how a client corporation is perceived by its different audiences and recommends strategies that improve or enhance these perceptions and impact on key decision -makers, opinion-formers and ultimately stakeholders."

And Eligo also tell us that by happy co-incidence (divine intervention?) they have seen "extensive corporate experience at work for clients across the world and in a variety of ways. This has included among many others Shell, BAe Systems, General Mediterranean Holding, Raffles Hotels, Balkan Holidays and Shell Companies in Saudi Arabia." 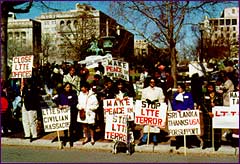 Eligo has a thank you page which includes an endorsement from Maragart Thatcher who had this to say:

"I was truly delighted to have had the opportunity to participate in your exciting programme of events. I wish Eligo every success in its work which I was pleased to learn will now be launched across Europe and North America."

Eligo also worked for New Labour. The image of protestors opposite is how they advertise how their 'crisis management specialists' are on constant standby 'to counsel our clients facing potential or soon-to-become public crisis situations'. This is resolved in a 'discreet, cost effective and innovative way.'

Bailey became a supporter of the Labour Party in 1996 having previously supported the Conservative Party. He is a member of the Labour Party and the Amicus trade union. It was reported in The Sunday Times in March 2005 (the article was subject to a legal action brought by Bailey) that the Party had turned down an offer by Bailey to donate to the Party's 2005 General Election campaign following a dispute between Bailey and a leading labour party figure. According to the Independent:

Mr Bailey's inclusion surprised some Labour insiders. Last year, the party reportedly turned down his offer of £500,000 amid concerns that he was a lobbyist with clients including members of the Saudi royal family and defence companies such as BAE.

Bailey had clashed with the controversial Labour fundraiser and Tony Blair's Middle Eastern envoy, Lord Levy. Tony Blair, Party Chairman Hazel Blears and the Chairman of the Labour Party's National Executive Council, Sir Jeremy Beecham have all publicly endorsed Bailey and welcomed his support. In November 2006 the Electoral Commission published its quarterly report which stated that Bailey had made a £50,600 donation to the Labour Party.

According to its 2006 Annual Returns Anthony Bailey is the sole Director of the company as well as its only shareholder. The company's accounts state that “Mr A Bailey is the managing director and is now the only shareholder”. Annual Returns from 2002 confirm that a Spanish man Pablo Carrington was once the joint owner of the company with Bailey. An expired internet page described Pablo Carrington as the managing director of Eligo International France and gives the address of 58 rue Tiquetonne, 75002 Paris. Carrington also served as a Director and Secretary at Eligo International between 17 February 1998 and 24 June 2003 when he resigned. A third board member was Edwin de Roy of Zuydewijn, the ex-husband of the Netherland’s Princess Margarita. He was involved in a Royal Scandal when Queen Beatrix made public accusations about his recruitment business Fincentives BV and apparently had him investigated by the Dutch secret service. He served as Director between 17 February 1998 and 16 June 1998.