Douglas Davis, journalist and critic of the BBC

Douglas Davis, originally from South Africa, is a London-based writer and analyst specializing in Middle East and European affairs. According to a biographical note 'He has lived and worked on four continents. In Israel, he was a senior editor of the Jerusalem Post for ten years and also the Middle East Correspondent of the Australian. He now writes regularly for the Spectator in London and has been an analyst on Middle East affairs for the BBC, ITN, CNN, and Sky television, among others.'[1]

Davis is married to Helen Davis a long time journalist and public relations operative who in 2012 is a London-based conference organiser with Helen Davis Associates.[2]

The pair were the only directors of a company called Intermed Associates between August 2001 and January 2016 when the company was dissolved.[3] 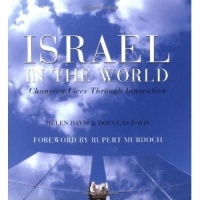 Israel Today for the World of Tomorrow Israel in the World: Changing Lives Through Innovation Helen Davis and Douglas Davis Weidenfeld & Nicolson, 2005, With a foreword from Rupert Murdoch.

Davis has written widely for conservative news outlets such as the Spectator. From at least 1990 Davis worked for the Jerusalem Post, providing copy from London from 1990 to at least 2002 and writing regular copy for the paper until 2005. He was for a period a 'senior editor' at the Jerusalem Post according to some sources.[4]

Views on the BBC and Israel and the US

Davis attacked the BBC in an article in the Spectator in May 2002. According to a Guardian report:

The BBC is largely responsible for the growth of anti-Semitism in Britain, a journalist on the Jerusalem Post has alleged. An "unchallenged diatribe" of opposition to Israel's policies - which paints the Middle East as a "monochromatic, single-dimensional comic cut-out" - has become part of BBC corporate culture, he claims. "Wittingly or not, I am convinced the BBC has become the principal agent for reinfecting British society with the virus of anti-Semitism," Douglas Davis, the London correspondent of the Jerusalem Post, writes in this week's Spectator. The radicals of the 60s are now in positions of political power, Davis claims, and are making policy decisions based on "post-colonial guilt", fuelled by the BBC.

The corporation has a propensity to "select and spin the news in order to reduce a highly complex conflict to a monochromatic, single-dimensional comic cut-out, whose well-worn script features a relentlessly brutal, demonically evil Ariel Sharon and a plucky, bumbling, misunderstood Yasser Arafat, the benign Father of Palestine in need of a little TLC (plus $50m a month) from the west," writes Davis.[5]

According to the Jerusalem Post: 'On May 30, 2002 Douglas Davis, the London correspondent of the Post, wrote: "Why I won't talk to the BBC" and explained that since September 11, 2001 [the date of the bombing of the World Trade Center in New York], he had refused all invitations to appear on the BBC because it had crossed a dangerous threshold of anti-Israeli and anti-American bias.'[6]

Between at least 2009 and 2012 Davis was a board member of the Paris based Jean Jacques Rousseau Institute[7][8] Since April 2011 Davis has written articles for The Commentator, the web magazine of the Henry Jackson Society.[9]