From Powerbase
(Redirected from Denis McEoin)
Jump to: navigation, search 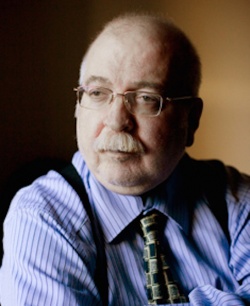 Denis M. MacEoin (b. Belfast 1949) is an Islamic "scholar" – new-orientalist, a journalist for several rightwing organizations (including Daniel Pipes's Middle East Forum), popular-novel author (under the pseudonyms: Daniel Easterman and Jonathan Aycliffe) and zionist advocate. MacEoin often writes letters to the editor of newspapers to highlight Arab/Islam/terrorism/anti-semitism issues; alternatively, MacEoin writes to "defend Israel".[1] MacEoin also took on a role to oppose the AUT boycott in 2005, and his statements against the boycott were well publicized by zionist organizations.[2]

MacEoin studied English Language and Literature at the University of Dublin – Trinity College, Persian, Arabic and Islamic Studies at the University of Edinburgh, and carried out research for his PhD at King's College, Cambridge. His PhD dissertation dealt with two heterodox movements in 19th-century Iranian Shi'ism: Shaykhism and Bábism.

From 1979-80, he taught English, Islamic Civilization, and Arabic-English translation at Mohammed V University in Fez, Morocco, before taking up a post as lecturer in Arabic and Islamic Studies at Newcastle University. His post at Newcastle was abolished in 1986 by its Saudi sponsors, who disliked the fact that he was teaching subjects such as Sufism and Shi'ism. In 1986, he was made Honorary Fellow in the Centre for Islamic and Middle East Studies at Durham University. Currently, he is the Royal Literary Fund Fellow at Newcastle University.[3]

He has been married to homoeopath and health writer Beth MacEoin since 1975. From 1965-1980 MacEoin was a member of the Bahai religion.

In recent years, he has become active in pro-Israel advocacy (hasbara), chiefly in his capacity as a writer. He continues to work on Islamic issues, particularly the development of radical Islam.

In December 2007, the BBC Newsnight program produced evidence that suggested some material on which MacEoin's report on radical Islam in the UK for Policy Exchange The Hijacking Of British Islam was based had been forged or simply fabricated.[4] Denis MacEoin, the author of the Policy Exchange report, states:

... a deepening belief that the future of civilization comes down to Israel in one way or another. If Israel goes, the values that have sustained Western civilization will have gone with it. We aren't simply fighting a war on terror, we're fighting for values that once seemed certain to survive and are now being threatened, above all by an unreformed Islam. For every liberal who chants 'Islam is a religion of love and peace', I can find a score of Quranic verses and hadiths that say quite the opposite. Politicians and the public must be educated."[5]

NB: the report fits into the "clash of civilization" or "war on terrorism" mould that aims to get the United States and Europe on board with Israel's wars.

The Policy Exchange report has been pushed strongly by zionist groups aiming to affect British policy toward its Muslim immigrant population, and European policy in general for the same purpose. On 12 February 2008, the Transatlantic Institute (the foremost zionist lobby in Europe) and the European Foundation for Democracy hosted a discussion on MacEoin's report, attempting to further promote its message in Brussels-Europe.[6]

In October 2015, MacEoin signed a letter in The Guardian along with more than 150 people drawn from the arts and politics. The letter launched Culture for Coexistence, an organisation that opposes the Boycott, Divestment and Sanctions movement.[7]

MacEoin wrote a lengthy article in the Summer 2010 edition of the Middle East Quarterly in which he accused Democratic Congressman Keith Ellison -- one of the two Muslims in the US House of Representatives -- of waging 'stealth Jihad' against America.[8]

'Letter to an anti-Israel activist' book

In December 2012, a book called 'Dear Gary, why you're wrong about Israel: letter to an anti-Israel activist', written by MacEoin, was published by the Institute for Middle Eastern Democracy, based in the UK.[9]

A launch event for the book was held on 20 March 2013 in the House of Lords, 'by kind invitation of Baroness Deech'.[10]