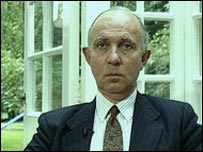 Former Ambassador to the UN and the EU, David Hugh Alexander Hannay, Baron Hannay of Chiswick, GCMG, CH is a British diplomat born in London and educated at Winchester College and New College, Oxford. He entered the Foreign and Commonwealth Office in 1959, and was initially posted to positions in Tehran and Kabul. Starting in 1965 and continuing into the early 1970s, held various positions in the foreign office in London during the 1970s and 1980s: in 1970 he was appointed 1st Secretary to the team negotiating the UK's entry into the European Community (EC). From 1973 to 1977 he was Chef de Cabinet for Sir Christopher Soames, Vice-President of the Commission of the EC. From 1977-84 he returned to the Foreign Office where he served as Head of the Energy, Science and Space department until 1979, when he was made Head of the Middle East Department and then Assistant Under-Secretary of State for the European Community. Hannay was a minister at the British Embassy in Washington, DC in 1984-1985, and was then promoted to ambassador and permanent representative to the European Economic Community from 1985 to 1990. He then spent the next five years as ambassador and permanent representative to the United Nations. He has taken on specialized roles such as membership of the UN High Level Panel on Threats, Challenges and Change, reporting to the Secretary-General in December 2004.[1][2]