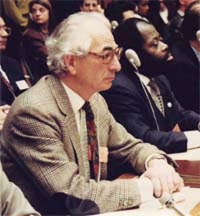 David Gerald Littman (b. 1933, London - died 2012[1]) was a counterjihad activist, but he was also known for his activities with Mossad. In 1961, he led Operation Mural, a Mossad operation in Morocco, where he set up a covert operation to take Moroccan Jewish children to Switzerland and then to Israel[2]. His exploits were considered so important that a documentary was made about them[3]. Together with his wife Giselle (aka Bat Ye'or) he travelled around the world presenting the "plight" of the dhimmis (non-Muslims living in the Muslim world), and Giselle is credited with the term dhimmitude[4].