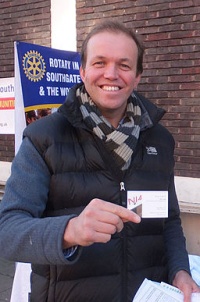 David Burrowes has been the Conservative Party MP for Enfield Southgate since 2005,[1] retaining his seat in the 2015 general election with a majority of 4,753. [2]

In March 2012 Burrowes wrote a column published in The Telegraph entitled, 'I can handle death threats, but gay marriage threatens freedom of speech', in which he stated his opposition to the goverment's consultation on this subject.

Since the government had announced in October 2011 a consultation on legalising gay marriage Burrowes said he had received 'hate filled messages of bigotry, intolerance, and violent threats (including death)' against him speaking up for the institution of marriage'. These had 'strengthened' his position 'that this debate is as much about freedom for people to express their belief as it is about equality'.

As an MP I have broad shoulders and will not be intimidated by threats in expressing my views. However, I fear for other people’s freedoms if marriage is redefined; where teachers are being told what they should not only think but teach - even if it goes against their conscience. Teachers will be reading Orwell with new meaning.

Burrowes said he had received a strong demand from the Coalition for Marriage pressure group, which had already amassed over 200,000 signatures for its petition supporting the current definition of marriage as a union between a man and a woman, he said. [3]

Burrowes is the UK Caucus Chair of the Israel Allies Foundation an organisation which exists to enlist Christian lawmakers internationally in support of Israel.

Burrowes has made numerous trips to Israel. A BBC investigation discovered that Burrowes was in breach of rules regarding declaring overseas visits paid for by foreign governments:

The Conservative MP for the Enfield Southgate constituency in north London visited Israel in January 2006 on a trip paid for by the Conservative Friends of Israel and the Israeli Ministry of Foreign Affairs.

On 13 February 2006, Mr Burrowes tabled a question about the Palestinian group Hamas without declaring an interest.

On 18 January 2006, Mr Burrowes participated in a debate entitled Palestinian Territories (Israeli Policy). While he declared he had recently been on a trip to Israel funded by the Conservative Friends of Israel, he did not declare that the Israeli Ministry of Foreign Affairs had contributed towards the trip.

On 4 July 2006 Mr Burrowes participated in a debate entitled Israel (War against Terror) during which he again declared that he had been on a trip to Israel funded by the Conservative Friends of Israel but did not declare the contribution of the Israeli Ministry of Foreign Affairs.

In October 2014 Burrowes went on a three day visit to Israel and the West Bank sponsored by the Israel Allies Foundation. Burrowes claimed to have timed his visit in order to avoid the house of commons vote on recognising Palestinian statehood.[5]

David Burrowes, a British MP who belongs to the Conservative Friends of Israel, decided to skip the vote and instead spend some time touring the Holy Land as a guest of the Israel Allies Foundation. Sure that the opposition would win the vote anyway, he felt that it was more important to show support for Israel on the ground than to cast a vain “no” vote in London.

Just to hear that Israelis and Palestinians are working together in the thousands, that is more meaningful that what is happening in the British parliament... [6]

He also characterised the relationship between Israeli settlers and Arab workers as one of peaceful coexistence:

The real voices on the ground aren’t heard – the fact that there is peace and coexistence among the people living in Judea and Samaria. Just seeing Israelis and Palestinians working together in a factory was a reality check...[7]

During the visit Burrowes and 19 other parliamentarians from 16 nations signed a resolution declaring that peace discussions between Israel and the Palestinian Authority ought to be conducted through direct negotiations. The resolution also called on UN Secretary-General Ban Ki-moon to 'investigate allegations of UNWRA’s alleged complicity with Hamas’s terrorist activity during this summer’s conflict'. It also called for the UNRWA's funding to be made dependent upon 'full transparency and accounting.' Burrowes presented the resolution to Israel's Deputy Foreign Minister Tzachi Hanegbi.[8]

Burrowes declared that he received a total of £2,276 from the Israel Allies Foundation to fund his visit.[9]

According to his declaration of financial interests Burrowes also visited Israel from the 11th to the 14 March. The visit, described as a political delegation, was sponsored by the Conservative Friends of Israel. Burrowes received £1,200 to fund his visit. [10]

In October 2015, Burrowes signed a letter in The Guardian along with more than 150 people drawn from the arts and politics. The letter launched Culture for Coexistence, an organisation that opposes the Boycott, Divestment and Sanctions movement.[11]