Sir David Bell is the former chairman of the Financial Times Group and also non-executive chairman of a small PR company The Windmill Partnership [1] which tried to sell Chai Patel's re-hab clinic, the Priory. (Not to be confused with David Bell the Permanent Secretary for the Department for Children [2])

Bell is also a UK council member of INSEAD, [3], a selective, private graduate business school ranked fourth in the world by Financial Times. He is also chairman of the Trust that oversaw the Millenium Bridge which closed to the public after two days.

Bell is chairman of the International Youth Foundation. [4]

Bell was a non-executive director for Vitec plc (before standing down in May 2007) [5] whose subsidiary brand Clear-Com® provide the technology for Outside Broadcast Trucks. Their website notes of their surveillance equipment that: "Law enforcement groups have their own specialized version of the trucks". Clear-Com showcase "a variety of real-world applications" including:

"Military, Aerospace and Government (MAG): How systems are used in target ranges, between military units, and at NASA testing and simulation environments. International customers include Boeing, Raytheon, the US Army, US Navy, police departments, mass transit authorities, and port authorities." [6]

Bexel (a Vitec subsiduary) help media standards by facilitating some of the ever increasing number of 'reality shows'. Examples are Survivor, American Idol, Brat Camp, The Osbournes and The Apprentice. [7]

As Pearson's 'Director for People' with responsibility for the 'recruitment, motivation, development and reward of employees across the Pearson Group'. Pearson is involved in the production and distribution of television programmes through three subsidiary companies Thames Television, Grundy and ACI. It also has stakes in two satellite television channels UK Gold and UK Living, not the worst of channels (providing old BBC repeats) and had a 24% (later to increase to 29.5%) stake [8] in Channel Five - the home of the sex fuelled documentary, phone-in swindling, Trisha Goddard, Home and Away, The Terry and Gaby Show, BrainTeaser and so on.[9] 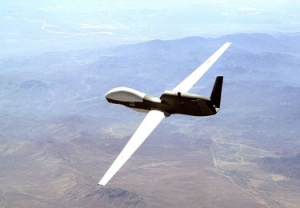 Another Vitec subsiduary, Drake Electronics Ltd is engaged in Defence Communications: Operations Centres, Air Defence Centres, Command Posts, Mobile/Tactical. Prime Contractors are: Alenia Marconi Systems, Raytheon, British Aerospace, IBM, Vickers and 'Others'. According to their presentation [10] they operate in Israal. They provide command & control for the US Department of Defense's Global Hawk, that's the Remotely Piloted Vehicle (RPV) in the picture. It spots the targets for the US military in Iraq and Afghanistan — aiding their renowned pin-point accuracy. [11] Bell is Chair of the Trustees of the Europe branch of the Institute for War and Peace Reporting.

Bell is part of the ImagineNations™ Group headed by Jacob Schimmel, [12] chairman of UKI Investments, the Schimmel family’s (one of the UK's largest) private real estate companies with interests in real estate, financial services, technology, aviation, tourism and telecommunications. The family’s business interests are centered in the United Kingdom, France and Israel with growing involvement in Eastern Europe and the United States. Recently, Schimmel has been involved in the purchase of IDB Holding Corporation Ltd., one of the largest business enterprises in Israel. [13]