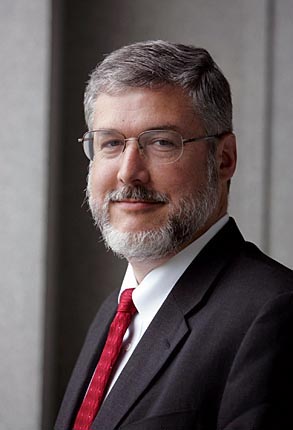 David S. Addington (b. January 22, 1957, Washington, D.C.), chief of staff and former legal counsel to Vice President Dick Cheney. He replaced I. Lewis Libby as Cheney's chief of staff upon Libby's resignation after being indicted on charges of perjury and obstruction of justice on 28 October 2005.[1] He was described by U.S. News and World Report as "the most powerful man you've never heard of".[2]

Addington is the son of Eleanore and Jerry Addington, a retired brigadier general.[3] Addington graduated from Sandia High School in Albuquerque, New Mexico in 1974. He is a graduate of Georgetown University and holds a J.D. from Duke University School of Law. He was admitted to the bar in 1981.

Addington was assistant general counsel for the Central Intelligence Agency from 1981 to 1984.[4] From 1984 to 1987 he was counsel for the U.S. House Permanent Select Committee on Intelligence and the U.S. House Committee on International Relations. He served as a staff attorney on the joint U.S. House-Senate committee investigation of the Iran-Contra scandal as an assistant to Congressman Dick Cheney, and was one of the principal authors of a controversial minority report issued at the conclusion of the joint committee's investigation.[5]

From 1993 to 2001, he worked in private practice, for law firms Baker Donelson Bearman Caldwell & Berkowitz and Holland & Knight, and the American Trucking Association.[7] He headed a political action committee, the Alliance for American Leadership, set up in large part to explore a possible presidential candidacy for Cheney.

After he began working for Vice President Cheney, Addington was very influential in many different areas of policy. He authored or helped to shape many of the most controversial policies of the Bush administration. Addington's influence strongly reflects his hawkish views on U.S. foreign policy, a position he had apparently already committed to as a teenager during the late phase of the Vietnam War in the early 1970s.[8]

Addington has consistently advocated that under the Constitution, the President has unlimited powers as commander in chief during wartime.[9] He is the legal force behind over 750 signing statements that President Bush has added to bills passed by Congress. Addington was a legal advisor to President Reagan, and suggested that such signing statements be used to exempt President Reagan from responsibility for the Iran-Contra scandal. Charlie Savage, the national legal affairs writer for The Boston Globe who won a Pulitzer Prize for his reporting on signing statements, quotes former associate White House counsel Brad Berenson saying that Addington "would dive into a 200-page bill like it was a four-course meal" as he crafted the statements.[10][11]

Addington helped to shape an August 2002 opinion from the United States Department of Justice's Office of Legal Counsel that said torture might be justified in some cases.[12] He advocates scaling back the authority of lawyers in the uniformed services. In November 2006, the German government received a complaint seeking the prosecution of Addington and 15 other current and former U.S. government officials for alleged war crimes.[13] According to Jack Goldsmith, the head of the Office of Legal Counsel from 2003 to 2004, Addington once said that "we’re one bomb away from getting rid of that obnoxious court,” referring to the secret FISA court that oversees clandestine wiretapping. [14]

He consistently advocates the expansion of presidential powers and the Unitary Executive theory, a nearly absolute deference to the Executive Branch from Congress and the Federal judiciary. In a June 26, 2007 letter to Senator John Kerry, Addington asserted that by virtue of Executive Order 12958 as amended in 2003 that the Office of the Vice President was exempt from oversight by the National Archives' Information Security Oversight Office for its handling of classified materials.[15] He had previously pushed for elimination of the position of director of the oversight office after a dispute over what should be considered classified information.[16] The story was broken after the Chicago Tribune noticed an asterisk in an ISOO report "that it contained no information from OVP".

Addington was mentioned by title in I. Lewis "Scooter" Libby Jr.'s indictment for five felony charges related to the Plame affair, regarding the leak of the identity of a CIA officer.[17] A PBS Frontline documentary "Cheney's Law" broadcast on October 16th, 2007 detailed Addington's key role in Bush administration policy making.[18]