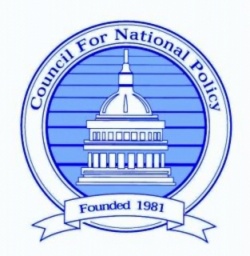 The Council for National Policy (CNP), is an umbrella organization and networking group for social conservative activists in the United States. The New York Times has described it as a "little-known group of a few hundred of the most powerful conservatives in the country," who meet three times yearly behind closed doors at undisclosed locations for a confidential conference. It was founded in 1981 by Tim LaHaye as a forum for conservative Christians seeking to strengthen the political right in the United States.