Colin Barrow (born 18 June 1952) is a millionaire hedge fund manager, local politician and Conservative Party donor. He is a co-founder [1] and former trustee of the right-wing think-tank Policy Exchange and was also a trustee of its now defunct sister organisation CChange, and Localis – a local government think-tank with which Policy Exchange is closely associated.

Barrow was a commercial manager at the oil and gas engineering company John Brown Group from 1974 to 1983. [2] In 1983 he joined ED&F Man (later renamed the Man Group) which was moving into alternative investment management. Barrow became Managing Director of the company’s Funds Management Division. [3] Barrow says he ‘made his money with the Man Group, where he founded and ran their investment management business up to and through the Group’s flotation in 1994.’ [4] He left the Man Group in 1996 to become chairman of the London hedge fund Sabre Fund Management Group. [5] He held this position until 2005 when he left to chair his own hedge fund Alpha Strategic plc. [6]

Politics and political donations and think-tanks 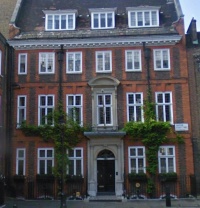 8 Barton Street, formerly owned by Barrow, was the HQ for Michael Portillo’s 2001 Leadership campaign. The property was for a time the registered address of the think-tank Localis.

In 2001 Barrow donated the use of his £10 million [9] town house at 8 Barton Street, Westminster to Michael Portillo’s leadership campaign. [10] The use of the property was valued at £4,967. [11] Dubbed ‘Portillistas’ by Westminster commentators, Portillo’s backers saw themselves as modernisers of an out of touch party which had put off potential voters through its negativity, xenophobia and social conservatism. Portillo withdrew from the Conservative leadership race on the evening of 17 July 2001 and subsequently announced that he would leave politics. His followers, Barrow included, founded a number of right-wing think-tanks to continue their re-branding exercise; chiefly Policy Exchange and CChange, but also Localis, which became closely affiliated with Policy Exchange.

Barrow has served as an executive/trustee of all three think-tanks. He was a director of Conservatives for Change or CChange (with the think-tank providing the initial funding for Policy Exchange through a £75,000 loan[12]) from October 2001 to August 2006, a trustee of Policy Exchange from July 2003 to January 2005 and a director of Localis from September 2001 to April 2007. He is reported to have provided funding to Policy Exchange and Localis [13] and his former home at 8 Barton Road was Localis’s registered address until July 2003 when it was changed to 10 Storey's Gate, where Policy Exchange and Conservatives for Change were based.

According to the Electoral Commission's Register of donations to political parties, Barrow donated a total of £30,750 to Conservative Central Office in three separate donations in 2004. [14] In January 2007 Conservative Party, Cities of London & Westminster accepted a new donation from Barrow of £2,600. [15]