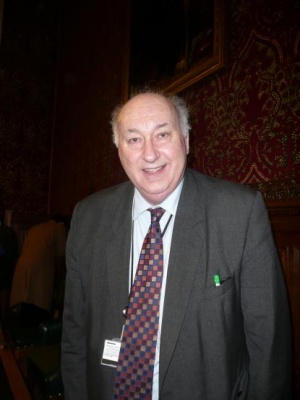 Bruce George (b:1 June 1942) is a Labour MP for Walsall South (since 1974). He has often acted as an election observer via the Westminster Foundation for Democracy.

He was a member of the defence Select Committee from 1979, becoming its chairman in 1997, and leaving the committee in 2005. He became a member of the Privy Council in 2001.

Although he has been an MP since 1974, and has never been on the frontbench. He is seen as a supporter of NATO and a strong military. In 2002 he was elected President of the Parliamentary Assembly of the Organization for Security and Co-operation in Europe, and was re-elected in 2003. Then between 2004 and June 2006 he was President Emeritus and Special Advisor on Mediterranean Affairs. He also regularly acts an election monitor, most recently in the disputed Presidential elections in Ukraine and Georgia.

He has been married to Lisa Toelle since 1992 and is Honorary Political Advisor to The Royal British Legion. In 1981 he was a visiting lecturer at the University of Essex. He is a vice president of the Psoriasis Association.