HN106 is the cypher given to a former Special Demonstration Squad undercover officer deployed from 1979 to 1983. On the 26 June 2018, the Undercover Policing Inquiry revealed HN106's cover name as 'Barry Tompkins' and that he targeted two groups but only named one of them: The Spartacist League of Britain (SLB).[1] 'Tompkins' is scheduled to give evidence at the Undercover Policing Inquiry in early 2021.

According to the Undercover Policing Inquiry, the undercover officer targeted two groups, naming one of them as 'The Spartacist League of Britain'.

The Spartacist League of Britain

Barry Tompkins is not recalled by any former members of the sole (named) target group of the time 'The Spartacist League of Britain' (SLB).

One former member stated in a letter to the Undercover Policing Inquiry:[2]

On the record, the inquiry has put out that a police officer using the cover name of Barry Tompkins was a group member for the period 1979 to 1983: the problem we have is that 'Barry Tompkins' was not a member of the group at any time so the public record is already corrupted. It is not a question of lack of memory by members of the group: the SL/B was a small cadre organisation, every member that ever was is known as there was no such thing as a 'fleeting involvement' by any member for any period.[2]

As mentioned, according to the Inquiry: 'He was initially deployed against one group, but then on his own ('authorised') initiative, infiltrated another between 1979 and 1983'.[3]

It seems likely from the dates that Tompkins originally infiltrated the Workers Socialist League – from whom two factions split from to form the SLB.[4][5][6]

It should be noted that is a supposition based on the scant information that the Inquiry has provided - it is unclear why the name of the first group Tompkins initially infiltrated has not been released.

If the assumption is correct, Tompkins would likely have been around the WSL between 1978 and 1979.

N.B. We are therefore are interested in learning more about these activities. If you think you have anything to add or to correct, get in touch (PGP key available on request).

The Workers Socialist League (WSL) was a Trotskyist group based in Britain. The group was formed in 1975 by Alan Thornett and other members of the Workers Revolutionary Party (WRP) after their expulsion from that group in 1974. The WSL was founded in 1975 with a leadership grouped around Thornett, Tony Richardson[7] and John Lister. Terry Eagleton, an eminent academic was also a member. In its first few years, the WSL attempted to capitalise on its existing base in industry and expand outwards from its base in Oxford, with Alan Thornett a senior shop steward at the Cowley Car Plant near Oxford. Cowley was a site of frequent industrial arrest.

At the time, the UK Government was concerned about 'industrial subversion' and formed a secret committee -'Subversion in Public Life' to monitor individuals allegedly involved.[8][9] Given this preoccupation, the WSL was a more obvious target than the SLB which had no such industrial base. The group had around 150 members at its peak (while the SLB peaked at around 90).[4][10]

Also in 1975, supporters of the U.S. based Spartacist League formed a group in London with the purpose of engaging other Trotskyite groups in debate. As they shared a common past in the International Committee of the Fourth International they paid great attention to the WSL. As a result in 1977 a group formed within the WSL, known as the Trotskyist Faction.[10] It would leave the WSL in 1978, joining with the London Spartacists to form the Spartacist League.[11] 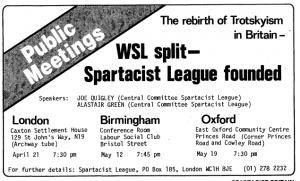 Infiltrating the Spartacist League of Britain?

As mentioned former members of the SLB are dismissive of the claim that anyone named 'Barry Tompkins' ever belonged to the group:[5]

'Roy', another member also said that to join the SLB a rigorous process had to be completed, including an examination of whether a potential applicants' ideology matched with the groups.[4] For instance, on joining the SLB, a Liverpool cadre went through the following process:[12]

The comrades' introduction to the politics of the SL included a series of educational classes covering the issues outlined above, as well as an SL national educational weekend school which included a history of the international Spartacist tendency and a discussion on the lessons of the Russian Revolution, in particular the Bolsheviks' struggle to retain state power following the October insurrection.

'Roy', added: 'Did they read much Trotsky in Hendon police school? Because you would need to know how to argue some stuff to get elected into membership'.[13]

Unlike other groups, the SLB did not form coalitions with other organisation or have 'front groups' a common practice within other Trotskyist groups, (for example, the Socialist Workers Party worked through the Anti-Nazi League at the time)[4] The timeline below, largely based on a review of the SLB's main publication Spartacist Britain, demonstrates there were almost continuous regular meetings, debates and courses hosted by the SLB during the infiltration period.

However, if his deployment was limited to attending public events as an audience member, this was a task traditionally fulfilled by a plainclothes officer as part of 'normal' Special Branch duties, rather than a long-term infiltrator.[14][15]

Reaction from former members of the SLB is mixed: While 'Roy' said the whole 'infiltration' was possibly a fabrication, 'MK' took it more seriously.[16] However, both have questions that they want the Inquiry to answer.[16][13]

The timeline below has been constructed from issues of the newspaper contemporary with Tompkins's deployment. N.B. If readers know more about the activities of this group, particularly in London, at the time of Tompkins infiltration, please get in contact.

It is worth noting that the corresponding groups in other countries were also subject to government surveillance around the time of Tompkin’s supposed infiltration. While it is commonplace for the international counterparts of British groups who were surveilled to also be monitored by their governments, in this instance the relevance is increased as the USA group exerted control over the various groups across the world. This would mean that the monitoring of either the Australian or English group would have likely have captured information emanating from the US.

Surveillance in the United States

The Spartacist League (SL) USA is a splinter or ‘tendency’ from within the American Socialist Workers Party which established itself in 1966. It was a small group, lead and founded by James Robertson. Robertson and others within the US directed activity from afar. This included the movement of members from one continent to another.[11]

The revelation that the Spartacist League US was under surveillance came in 1977, though the documents revealed in the magazine CounterSpy were dated 1972.[19] They appeared on an FBI list of 16 subversive organisations that also included the Black Panthers and Socialist Workers Party.[47] In the article in Workers Vanguard, responding to the revelation, the SL object to their place on the list as they are an open organisation – and are not secretly plotting the overthrow of the US government (see below).[20][19]

A known instance of spying by the Australian State has a more solid link with the SDS surveillance in the UK, due to both overlap in time and individuals spied upon.

The Australasian Spartacist group began in New Zealand in 1970 and by 1975 also had a presence in Australia. In June 1977, a student named Janet Langridge who was recruited by the Australian Security Intelligence Organisation (ASIO) to infiltrate the Spartacists.[21] Like both MI5 and UK’s Special Branch, it had already been infiltrating a multitude of left-wing organisations, placing agents in other groups like the Australian Communist Party and Aboriginal rights groups.[48][49] Langridge confessed to Spartacists and gave an extensive signed statement.[21]

Almost a year after the letters arrived, Langridge was visited at her flat by two ASIO agents several times and offered a part-time job spying on 'targeted Ieft-wing organisations.

During the period when the news of the infiltration was revealed, Adaire Hannah and Bill Logan were leading the organisation in Australia.[21][11] During this time, they were transferred to Britain at the behest of the leadership in the U.S. where they joined the nascent London Spartacist Group.[11] It seems possible that as Logan and Hannah were being targeted in Australia, this could be linked to the deployment of Tompkins in London. It is stated by the Inquiry that it was on his 'own initiative' that Tompkins moved groups but this begs the question on what prompted this initiative. However, another more straight forward reason for the infiltration is also possible: that the SLB was a new and growing group at the time.

In the Undercover Public Inquiry

HN106 is a sexagenarian. He was initially deployed against one group, but then on his own (authorised) initiative, infiltrated another between 1979 and 1983. The deployments are of interest to the Inquiry. Publication of his cover name should permit members of the target groups and others to provide and/or give evidence about them. He was promised lifetime anonymity by senior officers before deployment. This is a factor of some weight in his case. Members of the targeted groups pose no risk to his safety. He is concerned about the possible impact of media intrusion into his life and that of his wider family. Publication of his real name is not necessary to permit the terms of reference of the Inquiry to be fulfilled. His cover name will be published. In those circumstances, effect should be given to the promise made to him; and the interference which would be occasioned by the publication of his real name in his right to respect for private and family life would be neither proportionate justified under Article 8 (2) of the Convention.

In January 2019, 'Roy', a former member of the SLB applied to be a core participant in the Undercover Policing Inquiry. In the application, he made it clear that no one with the name 'Barry Tompkins' ever belonged to the group.[58] He also said that it would have been possible that someone of that name could have attended public meetings but not in any way be party internal party meetings or other business.[4]

The Chairman is not minded to include you as a core participant at this time. His reasons are as follows. Based on what the Inquiry has seen so far, there seems to be very little reporting on the Spartacist League of Britain. It may therefore be that the officer’s involvement with the group was fleeting, in which case it is not altogether surprising that members of the group do not remember him.[59]

Our investigation into this officer continues. In due course we will send the officer a list of questions to answer, and we intend to publish the intelligence reports relating to the Spartacist League of Britain (assuming that the reports are not subject to any successful restriction order applications). We will keep hold of your details in the meantime and will be in touch again once the investigation has been completed.

Despite the officer only having 'fleeting' involvement[59] with the group, it was announced on 9 September 2020 that 'Barry Tompkins' will be giving evidence at phase 2 of the 1st tranche of the evidential hearings of the UCPI which are due to commence on 25 January 2021.[60]