Transcript of the BBC Newsnight 20 August 2007 section on the climate change protests It can be viewed for a few days here (begins at the 22:25 min mark)

Kirsty Wark: The camp for climate action at Heathrow is shutting up shop tonight with organizers claiming it was a great victory which has taken their message to millions. But are they right? It seems that a recent upsurge in people committing to big changes in their lifestyles for the sake of the planet has dwindled away. Is that because politicians aren’t showing the kind of leadership that will spur the rest of us into action, or is it because the polluting potential of China means that our own meager efforts aren’t worthwhile? Stephanie Flanders has this assessment. 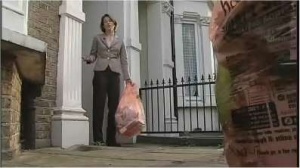 Stephanie Flanders: It was supposed to be consciousness raising, but the possible truth is that most of us may already have had our consciousness raised which is not planning to do much about it. So far the number of flights in and out of the UK has actually been growing faster than in 2006.
This time last year green was the new black. Everyone had a view about standby buttons or carbon offsetting or whether your recycling should be sorted or unsorted. Now, we are all probably recycling more, and we certainly know more about the risks climate change poses. But when it comes to the difficult decisions, if anything, people seem less willing to really change their lives. 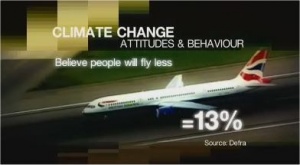 Take just the example of flights; in a government poll out this month, more than 75% of people said flying less would have a significant impact on our contribution to climate change, but only 13% thought that a lot of people would be willing to fly less. And over half said they themselves had not thought about or really didn’t want to cut down on their flights. Only 19% said that the environment was the most important issue facing the government, down from 25% in 2001. 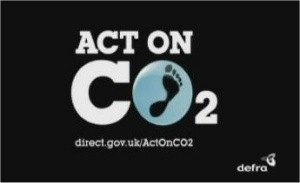 Defra advertising about our carbon footprint

Just as using these ads to lecture us about our carbon footprints, but most viewers would have been paying attention to Tony Blair who thought it impractical to ask people to take fewer flights. Not to mention the expansion of airports fully endorsed by Gordon Brown.
Matthew Price (Friends of the Earth): They are making it cheaper for people to drive their cars, and making it more expensive to travel by rail, and to travel by bus. They are expanding airports all over the UK. Their policies, when you look at the details, do not add up when it comes to combat climate change.
It was made extremely clear by Sir Nicholas Stern last year that the government has to intervene in the economy to make it cheap and easy for people to reduce their emissions. But at the moment they are trying to grow the economy in a way which is going to make climate change worse, and make it harder for people to cut down on their emissions.
Stephanie Flanders: Tony Blair came back from the G8 summit jubilant from getting forward movement on climate change from president George Bush. The Heathrow radicals don’t think that goes nearly far enough. But as Blair and Brown are always explaining, even if we all act as one nothing the UK does will make a difference if China and India don’t act as well. In the absence of that kind of global action a lot of people may have decided that nothing is exactly what they are going to do.
Kirsty Wark: Well, to discuss if there has been a shift in peoples' attitudes about how much of an impact they really have on climate change I am joined by James Panton from the group The Manifesto Club, which launched a website called Celebrate the Freedom of Flight. And Leo Hickman who has written about how individuals can tackle climate change. First of all, James Panton, do you detect a creeping skepticism about what individuals can do in the face of the bigger challenge of China and India. 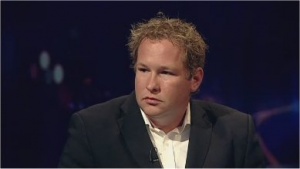 James Panton: Well, I think that there is a real mismatch between the kind of public discussion that is going on where people are being told what to do on a very individuated and moralistic level, and the real experiences on what they actually do. The example of flying is a perfect one; people don’t experience flight in terms of carbon emissions as parts per billion, but they experience the liberating aspect of flight. They experience the fact that they travel around the world, that they perhaps go on holiday with the family, have a cosmopolitan experiences, and that is something that, as you suggested, we want to celebrate, but I also think that people experience as very liberating and very positive.
Kirsty Wark: Rather than experiencing increasing their carbon footprint.
James Panton: Absolutely, I, I, I.., I don’t think that is peoples' primary concern when it comes to those big broader types of social policy issues.
Kirsty Wark: There certainly appears to be… The prime minister, from what he said, it is just not practical to limit peoples' holidays abroad or to use air travel. Leo Hickman, do you agree with James Panton's assessment?
Leo Hickman: Well, I think that it is going to take more than a year or two to, sort of, … for all of us to understand what de-carbonizing the economy is going to be. Of course, it is going to lag, and we have seen the demos this week, almost a frustration with the political leadership in terms of what we know is a huge problem facing us, yet there seems to be a slow, thick in the mud, progress towards this. We hear a lot of talk, but there is not much walking going on at the moment; I think that is borne out by the frustration by seeing the protestors this week.
Kirsty Wark: At the same time, is this issue more now about… there was a sort of flurry of activity, but now people are… reluctant to take major steps in their own lives because of a bigger threat.
Leo Hickman: What I have really noticed in the last year is this, kind of, build up of excuses. It is almost as the art of excuse -- we are getting incredibly sophisticated now -- with throwing out these China "building two coal fired power stations a week" and therefore I don't need to do anything. That does worry me slightly, because we seem to have gone from the point where a decade or so or more arguing about whether climate change is really anthropogenic or man-made, to pretty much nailing that down with a huge scientific consensus on that, to now going almost to the point of despair where we are throwing up our hands, and what can we really do. We are one person out of six billion on the planet and look at what the Indians and Chinese are doing. To me that lacks a sense of personal responsibility -- we are all in it together, we really need governments, big business, nations, but also us also individually, we all need to do our bit.
Kirsty Wark: James Panton…
James Panton: I think that really something different is going on. This is really not about people throwing up their hands and saying woo is me, what can I do. I think a lot of it has to do with people reacting against the rude moralism of the whole environmental campaign where there is a huge mismatch between the idea…
Kirsty Wark: … political or moral?
James Panton: I think that we could have a far more rational approach, for example, if we were really looking into the issues… it is a fact that our energy needs, consumption needs, will go up in the next century, and how do we meet that without moralizing to people that when telling them that they will suffer real hardships in their life and that they have to give up some of the liberating aspects of their society…
Kirsty Wark: Are you sure that you are not guilty in the art of the excuse?
James Panton: Well, it is interesting that when someone like me, as I often do, suggest that there really are political, scientific and engineering solutions to whatever is happening within the climate we are accused of being climate change deniers. I am accused of evading my own personal responsibility, and the big problem for any kind of political project that wants to inspire people and to change the way that they act is that you cannot do this with this miserablist moralizing.
Kirsty Wark: They accused you of miserablist moralizing… Leo Hickman.
Leo Hickman: Well, I have spent the best part of the last year or so researching the exact impact of our holidays, and of course that includes aviation fuel -- which has been hugely topical this week -- and I literally lay on the ground the facts that I found. Unfortunately the say very much what the protesters have been saying, that the unrestricted growth -- and that is the issue with aviation in particular -- the unrestricted growth that is being presented that we need to build all this airport expansion just doesn’t tally with what the scientists on the other side are saying is going to impact on climate change. We all love travel, but the uncomfortable truth is that we are going to have to think of ways to basically embed the environmental cost of every action we do and aviation is a great big flag flying around. We have to face up to these issues; not just about aviation, but across the board.

A critique of this Newsnight program can be found here