From Powerbase
(Redirected from BAPSC)
Jump to: navigation, search

The British Association of Private Security Companies (BAPSC) was launched in February 2006 by leading members of the private security industry under the chairmanship of Andrew Bearpark.[1] according to its charter its mission is:

The charter further states that:

The Association determines that it can only achieve its objectives through effective self-regulation and transparent engagement with UK Government departments and relevant International Organisations. The Association believes that it is only through effective self-regulation that the Members will enhance their position and be able to achieve differentiation from non Members in the same industry sector.[3]

The BAPSC held its first annual conference at Royal United Services Institute in London on 30-31 October 2006.[5]

A second event was held at the Royal Geographical Society on 4 December 2007.[6] one unnamed delegate provided in an insight into the Government's appetite for employing private military companies:

"Private security companies are not subject to political considerations in the same way conventional armies are. Plus you don't necessarily have to flag up money you spend on hiring mercenaries. It doesn't necessarily appear in the official defence budget," he said.

"Most importantly, if a private security contractor is killed on active duty, you don't get any body bag pictures on the front pages. That means no bad publicity for the government."[7]

A number of speakers at the conference called for the Government to regulate the industry:

The British government in particular is now required to reach rapid conclusions on the regulatory challenges for the UK industry. In his opening remarks, the BAPSC’s Director General, Andy Bearpark, made that unmistakably clear: “Any commercial company that spends six years thinking about something would no longer be a successful commercial company”.

In his Welcome Address, Sir Malcolm Rifkind called on HMG and other international governments “to do something to regulate the industry”. He made it clear that the concerns of many NGOs are legitimate and that their objectives are the same as those of the industry – despite a different analysis of the situation.[8].

Rifikind's remark may be a reference to War on Want, which issued a critical report on the industry, timed to coincide with the conference, which also called for government regulation.[9]

Ex-SAS soldier and security advisor Bob Shepherd has suggested that allowing British private military companies to self-regulate is "tantamount to allowing Afghan drug traffickers to police the border with Pakistan."

BASPC's idea of national regulation is limited to 'an ombudsman in a government depertment ' charged with collecting, investigating and processing complaints against CSCs [commercial security companies]. The administration of punishment, however, would still fall to the BASPC.[10]

Shepherd suggested that the BASPC had failed to police at least one of its members effectively in relation to the safety provisions of its charter.

the commercial security company that I resigned from in 2006 is a BAPSC member; the same CSC which failed to provide its CP team on the ground with weapons or an armoured vehicle for over a year; the same CSC which time and again dispatched CP advisers to Kabul who had no background whatsoever in Close Protection; the same CSC which advised me to allow the client to pursue dangerous activities in order to keep the contract..[11]

In February 2008, a major conference in Dubai brought together the Iraqi and Kurdistan Regional Government (KRG) and the business community.[12] The conference aimed to develop business deals, but these have to be guaranteed by "security". Ahead of the conference it was reported that discussions dealing with the later were to be overseen by "Private Security Company Association of Iraq (PSCAI) and the British Association of Private Security Companies (BAPSC)", and "these organisations will be participating within the summit programme, making contributions as two of the leading associations for the private security sector, ensuring that the industry is able to put its perspective across in addition to that of the Iraqi Government."[13] 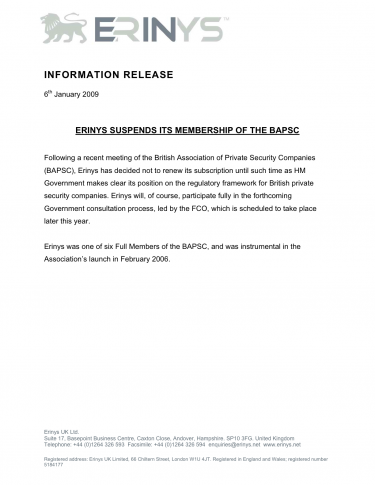 Erinys announces it has left the British Association of Private Security Companies, January 2009

Until eary 2009 BAPSC had 6 full members along with a larger number of provisional and associate members. Together they comprise many of the key British companies in the sector.[14] In January 2009 Erinys International left the organisation.[15]