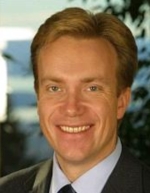 Role Within in the World Economic Forum

Børge Brende received his BA from the Norwegian University of Science and Technology.[2]

Børge Brende held the government posts of Minister of the Environment, 2001 to 2004, and Minister of Trade and Industry, 2004 to 2005. He has also been a member of the Norwegian parliament for more then 10 years.

In 1992 he became a full time member of the City of Trondheims Municipal Executive Board, and Chairman, Conservative party group, Trondheim City Council. In 1994 he was elected deputy Chairman of the Norwegian Conservative party and was member of the Storting, the Norwegian parliament, from 1997 to 2007. He served as member of the Standing Committee on Finance and Economic Affairs and deputy Chairman of the Standing Committee on Energy and the Environment