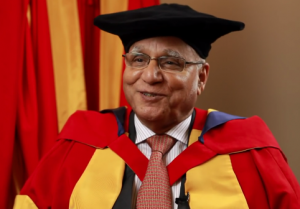 Anwar Pervez accepting his honorary doctor of laws from the University of Bradford, December 2012

Sir Anwar Pervez is a businessman of Pakistani origin, who is the founder of Bestway Holdings Ltd.

In 1956 Pervez moved from Pakistan to Bradford, and and in 1963 he opened up a small corner shop. This corner shop eventually expanded into Bestway, the UK's second biggest wholesale cash and carry chain.

In 1999, Bestway 'bought the Co-op's pharmacy business from under the noses of Boots and Lloyds Pharmacy for £620million', making it the UK's thirds biggest pharmacy group.

In 2004, despite having a turnover of £1.1billion, Pervez bought rivals Batleys for £100million, turning his company into the second biggest wholesaler. As of 2014, it has a turnover of £2.4billion.[1]

Due to his Pervez's Pakistani origins he is able to claim non-domicile status and legitimately hold his money outside the UK and thereby avoid UK tax laws. Pervez has donated to the Conservative Party both personally and through his company. Both himself and the other eight directors on Bestway's member-board are linked with Swiss accounts.

As a party donor, under tax rules, he must declare to HM Revenue and Customs that he will be ending his days abroad.[2]