The Anti-Terrorist hotline is a dedicated 24-hour telephone service staffed by specialist counter-terrorism police officers for members of the public who want to report terrorist activity or suspicious behaviour. [1]

The public are advised by the Police to trust their "instincts" and not judge whether or not something is suspicious - instead they should let trained officers decide.[1]

The slogan of the anti-terrorist hotline is: "If you suspect it, Report it". 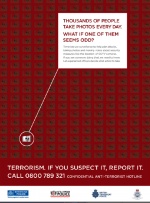 Soon after, the posters became the subject of criticism for playing on peoples' fears and promoting a surveillance culture.[2]

In August 2010, the Advertising Standards Agency (ASA) banned an advert aired on the Talksport Radio channel after 18 individuals filed separate complaints on the basis that the advert promoted the harassment of innocent people and played on peoples' fears."[3]

No. of Telephone Calls

During the poster campaign of 2007 (January - April), there were the following number of calls:[4]

The Anti-Terrorist Hotline pages on the Metropolitan Police Service website had 2,101 hits in March 2007. This increased to 11,306 in April 2007. The Greater Manchester Police website registered 328 visitors in March 2007 to its relevant Counter-terrorism pages. For April 2007, when the campaign was no longer running, it decreased to 112 visitors. There was also a slight increase in the number of visitors to the West Yorkshire and West Midlands CT pages.[4]