Andrew Apel is the former editor of the biotech industry newsletter, AgBiotech Reporter, headquartered in Cedar Falls, Iowa, U.S.A.[1] Apel has also been a regular contributor and guest editor of CS Prakash's AgBioView email list. He currently edits the website GMObelus and is on Twitter as @AgBioEye.

Apel was among those invited to contribute to a closed door meeting at the Vatican in Rome in May 2009 to discuss a campaign backing GM crops. The study week was organized by the GM scientist Ingo Potrykus, who is a member of the Pontifical Academy. Apel's topic, Financial Support of Anti-GMO Lobby Groups, was summarised in the study week publicity as follows:

Financial support for anti-GMO lobby groups is substantial, and severely distorts public discourse over a topic which would otherwise be uncontroversial. Governments, primarily in Europe, support the lobby groups in an effort to appear ‘green’ to their constituencies. Private enterprise, in Europe and elsewhere, support them in order to protect vested financial interests, or to enhance public perception of their products... [The payments] disclose the existence of an international “protest industry” which serves its own interests, and the interests of its funders. Sums spent directly by private enterprise on these groups are not easily quantified. These groups will continue to oppose agricultural biotechnology so long as it continues to be politically or financially advantageous to do so.[2]

Apel has long shown extreme antipathy to organisations and individuals critical of GM crops and has made repeated efforts to link them to acts of violence. He used the September 11 attacks, for example, to put forward the view that critics of GM, like Dr. Mae-Wan Ho and Dr. Vandana Shiva, had blood on their hands. He wrote:

With the recent attacks on workers in the World Trade Center and the Pentagon, attacks perpetrated by those who put political ideology above human life, we have an opportunity to re-evaluate the politics of Greenpeace (which has openly declared human welfare to be at the bottom of its agenda), and similar groups which advocate destruction and its attendant misery as a means of advancing their purposes. Those who destroy for political purposes are not unknown to this group... Vandana Shiva has blood on her hands, so does Mae-Wan Ho. So do others of their ilk. I recommend these folks lay low, very low, until political terrorism becomes fashionable again.[3]

A few months later Apel sought to link GMWatch founder, Jonathan Matthews, to terrorism, claiming, 'He takes money from Greenpeace and has been associated with at least one terrorist group.' [4] Apel appears to have based this association with terrorism on an Earth First newsletter containing an item with a link to a website - http://members.tripod.com/~ngin - founded by Matthews. The item concerned a completely non-violent 'picnic protest'. [5] In an email to GMWatch in 2008 Apel stated, 'I have described your ilk as "liars", "cretins", and "baby-killers".' (See email reproduced here.)[6]

Apel wrote of the death, injuries and often arbitrary and violent arrest of hundreds of protesters at the World Trade Organisation meeting in Genoa[7]:

Eco-reactionary protesters in Genoa, Italy have engaged in violence of such magnitude it eclipses everything since Seattle, even Gothenburg or Prague... Cops are cannon-fodder for street punks... A representative of someone's favorite cause has died... Maybe Greenpeace or Friends of the Earth (FOE) will decide he was an anti-biotech activist. Anything suffered by police officers in the course of defending civility and democracy will be ignored, while this dead activist will become a cult symbol... watch it happen, people, just watch.[8]

He also posted a spoof article attributing quotes to a 'non-violent activist' indicating such protesters engage in 'bombing sh*t', and 'blow sh*t up'.[9]

Apel's GMObelus website has a section called 'NGO Watch' (the same name as aggressive anti-civil society projects run by right-wing lobby groups like the American Enterprise Institute and the Institute of Public Affairs). In April 2009 this contained links to just three items, one of which was a piece entitled "'Riot' Tourism on the Rise".[10] Nothing in the article appears to have any connection with GM crops.

In December 2012 Jonathan Matthews of GMWatch published an article, Smelling a Corporate Rat,[11] about the campaign to discredit Prof Gilles-Eric Seralini's study. Seralini's study found that Monsanto's GM maize NK603 and tiny amounts of the Roundup herbicide it is designed to be grown with harmed the health of rats.[12] Seralini's study was subjected to a storm of criticism, but Matthews showed in his article that the criticisms, as well as having a dubious scientific basis, came largely from scientists with links to biotech companies. Other criticisms came from government bodies that had previously given positive opinions of the safety of GMOs and which were thus defending their own positions.

After Matthews's article was published on Spinwatch, he received the following email from Apel, defaming Seralini and his study and boasting of his own role in the smear campaign against Seralini: 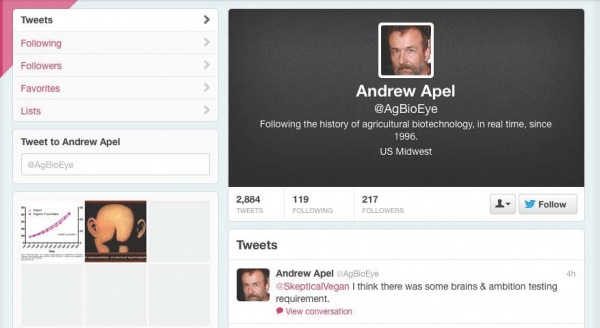 I wish to express my disappointment and dismay at your failure to mention me in your article, 'Smelling a corporate rat', at http://www.spinwatch.org/-articles-by-category-mainmenu-8/46-gm-industry/5546-smelling-a-corporate-rat

When the story of Seralini's malfeasance and manipulation first broke, I worked a continuous 22 hours on Twitter informing science journalists and bloggers of the latest opinions of scientists, government bodies and academies regarding the shocking shortcomings of the rat 'study' and the blatant conflicts of interest involved in its design, funding, and publication. My Twitter announcements were seldom more than 15 minutes behind web publication of relevant information, due to diligent scouring of sources in three languages.

My efforts, and those of others working 'behind the scene', should not go unrewarded by your failure to mention us. Perhaps you could write a follow-up piece to remedy the situation. Much of Seralini's currently pitiful reputation can, and should, be attributed to the efforts of an army of outraged journalists and bloggers who were grievously offended by Seralini's machinations and thereby driven uncharacteristically to find, and rely upon, credible sources.

Apel has ridiculed Native American concerns over GM contamination of wild rice - 'Native Americans have found a new way to increase their income'.[14] He was also at the forefront of attempts to use the resistance of countries in southern Africa (2002/3) to accepting GM-contaminated food aid, as a way of attacking biotech industry critics. Apel suggested there might be a moral imperative for the U.S. to bomb Zambia with GM grain if it continued to reject it.[15] On the same discussion list Apel also wrote of the crisis, 'I can almost picture the darkies laying down their lives for the vacuous ideals... their death throes, how picturesque, among the baobab trees and the lions!'[16] In October 2002, Monsanto's electronic newsletter, 'The Biotech Advantage,' carried the headline "Academics Say Africans Going Hungry Because of Activist Scare Tactics".[17] The 'activists' in question turned out to be the staff of a Catholic theological centre and a Zambian agricultural college who had expressed concerns about GM crops. Their 'academic' attackers, by contrast, included Andrew Apel together with AgBioWorld's co-founders, CS Prakash and Greg Conko of the Competitive Enterprise Institute.

Apel has put a box in the left hand panel of his website GMObelus headed 'VAD and Golden Rice'. The rotating text in this box implies that if it hadn't been for regulations inhibiting the release of genetically engineered Golden Rice, many millions of children could have been saved by this GM crop from death and blindness due to Vitamin A deficiency (VAD).[18] And in an article on the site, 'Rogue's gallery opposes Golden Rice', Apel implies that critics of Golden Rice may be responsible for more deaths than 'Stalin's intentional food-deprivation policies during 1932-33'.[19] Apel provides a link from this statement to a document calling for the Great Famine in Ukraine in 1932-33 to be recognised as 'genocide' and as one of 'the cruelest crimes to have taken place in Europe in the 20th century'. The document is titled 'Execution by hunger: Unknown genocide'.[20] The apparent implication is that opposition to Golden Rice represents an even greater crime.

Apel is equally loose in his statements characterising the funding of NGOs critical of GM crops. He has claimed, for instance, in his role as guest editor of CS Prakash's AgBioView, that Friends of the Earth receives nearly half of its funding from the European Commission and he implies that this may be because Friends of the Earth's GM agenda suits the Commission.[21] Likewise, a piece on Apel's website titled 'Europeans oppose GM cassava for Africa' reports on the opposition to field-testing of a GM cassava by Environmental Rights Action/Friends of the Earth, Nigeria (ERA/FoEN) and over 30 other groups in Nigeria. Apel poses the question, 'Why would European governments oppose such a project?' and follows this by the statement: 'The Friends of the Earth are almost entirely funded by the European Commission and the Netherlands.'.[22]

But according to Nnimmo Bassey, the Director of Environmental Rights Action/Friends of the Earth, Nigeria (ERA/FoEN), 'ERA is not funded by the EU'.[23] Likewise, another national group - Friends of the Earth, England, Wales and Northern Ireland (FoEEWNI), gets approximately 90% of its income from individual supporters.[24] It is only Friends of the Earth Europe (FoEE) in Brussels which receives any substantial funding from the European Commission. And even in this case, FoEE's director points out that FoEE's position on issues like GM 'demonstrate that we do not follow the line of the Commission'. She also points out that 'without funding for NGOs (something that is legally set out in financial frameworks, for example the Life+ programme at European level and national decrees at national level), the public debate in Brussels would be unacceptably steered by corporate lobbyists.'[25]

Interestingly, Apel's own contributions to the public debate on GMOs have frequently been made in close coordination with individuals and organisations enjoying significant corporate backing. Quite apart from his years as editor of a publication 'aimed at decision makers in the worldwide agricultural biotechnology industry'[26], he has also been a guest editor and frequent contributor to AgBioWorld, in which Monsanto and its PR agency the Bivings Group have played a covert role[27], and which was co-founded by Greg Conko of the Monsanto-backed Competitive Enterprise Institute.[28]